A new study of the impact of high EV adoption on the Western US power grid by a team from Pacific Northwest National Laboratory (PNNL) has found that 2028 grid resource adequacy—from generation through transmission—is likely to be sufficient for high EV penetration.

The team estimated the EV resource adequacy for the entire WECC interconnection for a likely unmanaged charging scenario under which most LDVs were charging at home starting in the evening (Home High power No Delay: HHND). Unmanaged charging is predicated on arrival time at home in the evening—the time at which the PNNL team assumed charging would begin.

The researchers said that this suggests a significant opportunity to substitute additional generation and transmission requirements with smart charging strategies and much better utilization of the existing grid.

On the operational side, the PNNL team found that a number of changes could accommodate EVs: 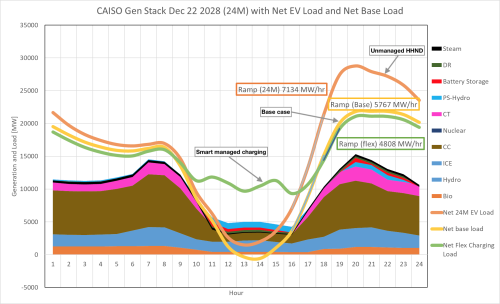 In a follow-on study, researchers will take a closer look at ways to integrate EVs into local and regional power distribution systems across the nation.