Researchers from the GEOMAR Helmholtz Center for Ocean Research Kiel have found that considerable quantities of the greenhouse gas methane escape uncontrolled into the water from abandoned oil and gas wells in the North Sea. The work, published in the International Journal of Greenhouse Gas Control, confirms earlier studies based on a greatly extended data basis. 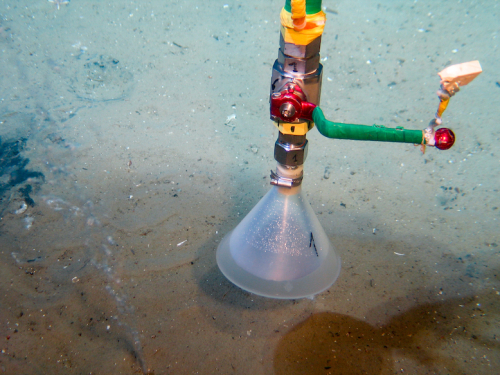 On the basis of investigations directly on the seafloor it was possible to determine the amount of escaping gas. Photo: ROV team/GEOMAR

During expeditions to oil and gas reservoirs in the central North Sea in 2012 and 2013, scientists of the GEOMAR Helmholtz Center for Ocean Research Kiel discovered that methane bubbles emerged from the seabed around abandoned wells. The gas originates from shallow gas pockets, which lie less than 1,000 meters deep below the seafloor and that were not the target of the original drilling operations. An initial assessment showed that these emissions could be the dominant source of methane in the North Sea.

The new study by GEOMAR scientists confirms this initial estimate on a larger data basis.

We have combined investigations at additional wells with extensive seismic data. The results clearly show that thousands of tons of methane are leaking from old drill holes on the North Sea floor every year.

During expeditions with RV POSEIDON in 2017 and 2019, the researchers were able to detect gas leakage at 28 of 43 directly investigated wells.

The propensity for such leaks increases the closer the boreholes are located with respect to shallow gas pockets, which are normally uninteresting for commercial use. Apparently, however, the disturbance of the overburden sediment by drilling process causes the gas to rise along the borehole.

—Dr. Matthias Haeckel from GEOMAR, who lead the study

In addition, the team used available seismic data of the industry from the British sector of the North Sea to make further statements about the boreholes in the area.

We cover 20,000 square kilometers of seafloor in our study, which is approximately the size of Wales. This area contains 1,792 wells of which we have information. We evaluated a number of factors, such as location, distance to shallow gas pockets, and age, based on our direct measurements and weighted how these factors promote methane gas leakage from old wells. The most important factor was indeed the distance of the wells from the gas pockets.

The positions of the boreholes and the location and extent of the gas pockets indicate that this area of the North Sea alone has the potential to emit 900 to 3700 tonnes of methane every year.

However, notes Dr. Haeckel, more than 15,000 boreholes have been drilled in the entire North Sea.

In seawater, methane is usually consumed by microbes. This can lead to local seawater acidification. In the North Sea, about half of the boreholes are at such shallow water depths that part of the emitted methane can escape into the atmosphere. Methane is the second most important greenhouse gas after carbon dioxide.

The authors of the study encourage the industry to publish their data and recommend more independent emission measurements from abandoned wells in order to develop stricter guidelines and legally binding regulations for abandonment procedures.

This study was funded by the STEMM-CCS project (grant number 654462) of the Horizon 2020 Framework Programof the European Commission.