The report, Opportunities for hydrogen in commercial aviation, which had technical input and funding from The Boeing Company, finds that growing hydrogen industry momentum could provide an opportunity to introduce hydrogen for niche airport applications (such as ground support equipment) as early as 2025.

By 2035, hydrogen could provide much deeper decarbonization when used in conjunction with existing airport and aircraft infrastructure, and could then support a complete transition from conventional jet fuel around 2050. 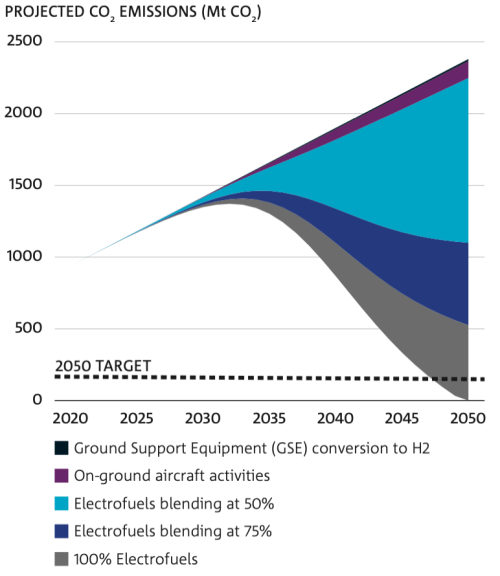 CSIRO Chief Executive Dr Larry Marshall said the disruption to air travel caused by COVID-19 had caused the industry to rethink their paradigm and recover to a different “normal”.

As we see travel resume, hydrogen presents a key solution to enable a sustainable recovery for the industry using liquid renewable fuel, and to grow future resilience from threats like oil shocks.

CSIRO’s 2018 breakthrough in fuelling hydrogen-powered cars with liquid renewable fuel has created opportunities for industries to supercharge their decarbonization by investing in hydrogen. Science becomes real in the hands of visionary partners like Boeing who are willing to embrace science to support the development of a whole new sustainable and resilient industry that supports a green recovery.

The global aviation industry consumes 3.2 times more energy than the whole of Australia each year and has widely adopted a target of reducing their emissions by 50% based on 2005 levels, with no net increase after 2020.

A range of sustainable fuels could assist in meeting the emissions target, and hydrogen-based fuels represented a key path to sustainable transport.

In addition to more efficient aircraft, sustainable aviation fuels like hydrogen are a necessary contributor to the decarbonization of aviation, and we are committed to furthering their development.

While COVID-19 has had a major impact on the sector, the report takes a long-term view, presenting a meaningful way to recover while prioritizing sustainability.

CSIRO is undertaking a broad range of hydrogen-related research, with a focus on reducing emissions associated with transport, energy production, and exports.

CSIRO’s goal is to build a clean and competitive hydrogen industry delivering economic benefit and a secure and resilient energy system in support of Australia’s transition to a low emissions future.

Predictions for 2050?? Who knows what we will have discovered by then. I reminds me of Buzz Aldrins (Apollo 11) comment that he was promised moon colonies and all he got was Facebook.

Anyway, if you look at pictures of the Space Shuttle blasting off, you can get an idea of what one of the major problems is with liquid hydrogen (other than handling a material that is -253 deg C or 20 deg K) and that is low volumetric energy density. That huge tank attached to the shuttle and which is considerably larger than the shuttle is the liquid hydrogen fuel tank. Liquid hydrogen passenger aircraft? I would believe ammonia powered before I believe liquid hydrogen and I do not believe that either.

Yes, you could use fuel cells for ground handling equipment but why? Batteries will work for most of these applications. Use the hydrogen where it might make a difference such as direct reduction of iron ore to make steel, etc.

Projects on aircraft industry or typically over 15 years so they really have to think ahead. Ammonia has a energy density half of. Jet fuel so it can’t be used for long reach flight , maybe very short reach . Liquid hydrogen is 3 time more energy dense than jet fuel so there is a massive saving on the full aircraft weight so as a result the volume you need is not as much ac you think. The thing is that you can’t store in the wings as it is too much volume and it would be too difficult to thermally isolate it. Like they say in the article you would need a new aircraft architecture like flying wing. I think hydrogen ultimately will prevail but the technology gap is big .

The win/win here is this gives the oil and gas companies a continuing role in the energy field by producing H2 by reforming HydroCarbons, hopefully at plants designed for zero emissions...the same holds true for burning H2 in sea ships instead of dirty oil.
I hope the companies will improve this estimated schedule; it may take federal laws to get it done...real reasons to consider how and for whom you vote in the next election.

All the ground handling equipment can be battery electric today, and it will be cheaper to operate over its lifetime. No obvious use case for Hydrogen. I think Hydrogen planes will take off... But I expect battery planes to dominate short-haul flights by 2040. I expect 100 seater, 1000 mile range battery electric plane to be flying within 10 to 15 years. Of you get that range. I think 2500 miles and 200 people on a battery electric plane is probably the limitation within the next 30 years. Still most of the busiest airplane routes are rather short :

x
If you ask most people what route in commercial aviation transports the most passengers, very few would know that it is actually a domestic route in South Korea.

More than 13 million passengers fly on commercial aircraft between Gimpo Airport in Seoul to Jeju island each year.

On average there is a flight every eight minutes from Seoul’s capital to the beach resort island of Jeju, with up to 180 flights scheduled each day. That means more than 36,000 passengers take the 449km hop daily on average. A total of seven airlines compete on this route.

The second busiest route was Sydney to Melbourne which saw 10 million passengers fly between Australia’s two largest cities—far behind Seoul-Jeju in first place.

Interestingly, the top seven busiest passenger routes in the world are all domestic, with flights from Tokyo Haneda to Sapporo and Fukuoka featuring in the top 10 as well.

ADVERTISEMENTSCROLL TO CONTINUE WITH CONTENT
The Boeing 747 Aircraft Turns 50 This Week
SYDNEY, AUSTRALIA - The second busiest route was[+]
GETTY IMAGES
Other busy domestic routes included Mumbai to Delhi in India and São Paulo (CGH) to Rio de Janeiro (SDU) which both see over 40,000 flights per year.

Only 18 out of the top 100 busiest routes are international.

The busiest international aviation route in the world is Hong Kong to Taiwan Taoyuan which sees more than 6.7 million passengers.

With the journey from Hong Kong to Taipei being just a short hop of 800km, and all the other routes in the top 10 being domestic, as well as short-haul, the question must be asked whether better ground transportation links could be provided for such short domestic routes, such as rail and ferry.

Although the list published by OAG was from full annual data in 2018 the numbers will still likely hold strong.

Axial flow electric motors with superconducting windings will have 3 times the power to weight of jet engines and would marry well with cryo hydrogen storage. The bottleneck is fuel cells, with much higher specific energy and energy density required for that system to work.

To make any energy dense fuel on *any* scale that matters to AGW, you start with the most dense energy there is: fission.

And then extracting carbon dioxide & synthesizing avgas is both feasible, and basic chemistry for a carbon neutral round trip.

The notion we will ever use *vast* areas of low energy density weather harvesters to split water electrically doesn't even pass the sniff test.

But the mass delusional hype is pumped out day after day to avoid ever saying the 'n' word.

With hybrid turbines you just need batteries.
Plenty of power for take off and climb, then you recharge.