The Romanian city of Ploiești has opted for 20 low-floor Solaris Trollino 12 trolleybuses. According to the contract worth PLN 36 million (US$9.6 million), the vehicles will have been delivered within two years from the signing date. 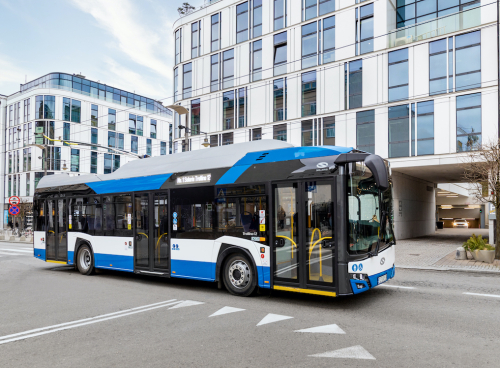 The trolleybus network launched in Ploiești in 1997 is the newest of all networks in Romania. By placing the order, the nearly 250,000-strong city will replace about half of its fleet. New Solaris vehicles will also make it possible for the city to expand existing traction lines and its transport network.

The 12-meter Trollino 12 trolleybuses commissioned by the city will be propelled by a 160 kW electric motor. The buses will offer 35 seats on board. The vehicles will also feature a space fitted with a strap system for passengers in wheelchairs or travelling with prams or pushchairs, and a ramp easing the entry installed at the middle-door. Trolleybuses are entirely low-floor and offer the kneeling function enabling the right side of the trolleybus to lower at a stop.

The Polish manufacturer will also implement a range of solutions increasing passengers’ comfort and safety in its Trollino vehicles. These will mainly include air conditioning of the passenger compartment, a passenger information system, a set of video surveillance system cameras and routers ensuring access to wireless Internet, whereas a passenger counting system will be mounted above the doors.

The ordered Trollino 12 will be the first Solaris trolleybuses to go to Ploiești, but not the first ones in Romania. Solaris is the trolleybus market leader in the European Union and had already delivered nearly 100 trolleybuses to the Romanian municipalities of Baia Mare, Galați and Cluj-Napoca.