Bitcoin is a digital currency based on a cryptographically secured distributed ledger; it is the first and best-known blockchain application. Bitcoin relies on a computationally intensive validation process called mining that requires specific hardware and considerable amounts of electricity to reach consensus about ownership and transactions. 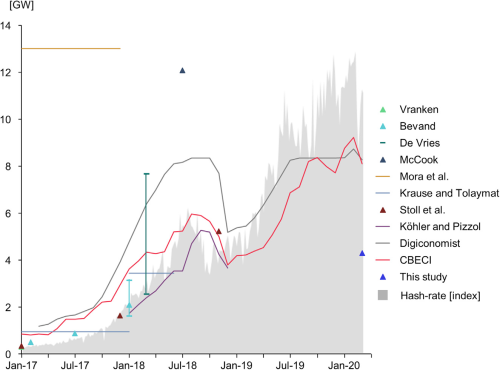 However, the authors note, most studies have been focusing exclusively on Bitcoin and have ignored the more than 500 further mineable coins and tokens. In the Joule paper, the researchers analyze 20 cryptocurrencies, which account for more than 98% of the total market capitalization of cryptocurrencies.

To estimate the energy consumption of cryptocurrencies beyond Bitcoin, we resort to a methodology proposed by Krause and Tolaymatthat employs hash rates of cryptocurrency networks and suitable mining devices. Hash rates measure the processing power; they describe the number of attempts per second to solve a block in the so-called proof-of-work mining process.

… Based on the underlying algorithms, current hash rates, and suitable mining devices, we conclude that Bitcoin accounts for 2/3 of the total energy consumption, and understudied cryptocurrencies represent the remaining 1/3. Therefore, understudied currencies add nearly 50% on top of Bitcoin’s energy hunger, which already alone may cause considerable environmental damage. Including the remaining hundreds of mineable coins and tokens, which account for the 1.77% market capitalization not captured by the top 20, would further increase the share of energy consumption caused by cryptocurrencies besides Bitcoin.