The Orange County (CA) Transportation Authority (OCTA) has a Tesla Model X SUV as its first all-electric vehicle in the OCTA Vanpool program. The Tesla X is provided by Green Commuter, one of three vanpool companies contracted by OCTA to provide vehicles to commuters in Orange County to help them share the ride as they travel to work.

The all-electric vanpool vehicle is being used by five employees who work in Seal Beach at the Naval Weapons Station. They commute approximately 140 miles roundtrip each day from near Murrieta in southern Riverside County. 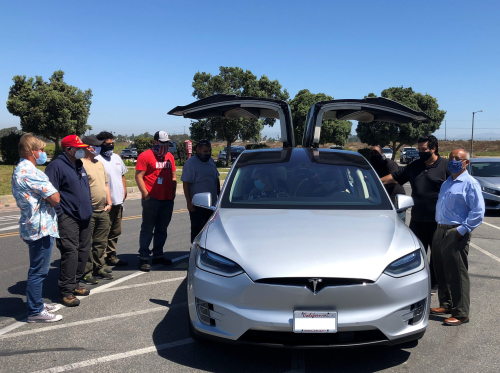 Currently, the OCTA Vanpool program has 164 active vehicles, most of them that run on gasoline, and now the first all-electric vehicle, with more expected to be added to the fleet.

The overall number of vanpools currently running in Orange County is down sharply from approximately 470 operating prior to the coronavirus (COVID-19) pandemic, when many employees began working remotely.

This year, OCTA has taken several steps in the continued effort toward zero-emission technology. In January, OCTA introduced a fleet of 10 hydrogen fuel-cell electric buses and debuted the nation’s largest hydrogen fueling station at its Santa Ana Bus Base.

In April, the OCTA board approved a pilot program for 10 plug-in battery-electric buses, scheduled to begin operating in late 2021.

About time, I tried to get Orange, Riverside and San Diego counties to promote car pools 20 years ago, all they replied is "thanks for taking our survey".