The consortium behind the WESTKÜSTE100 project received the go-ahead and funding approval from the Federal Ministry of Economic Affairs and Energy that will make it Germany’s first hydrogen project included in the “real-world laboratories fostering the energy transition” program.

The project is backed by an investment volume totalling €89 million (US$105M). The funding volume approved for the project’s launch on 1 August 2020 amounts to €30 million. As a result, the real-world laboratory project has taken a significant step forward towards its goal of progressively establishing a regional hydrogen economy on an industrial scale. 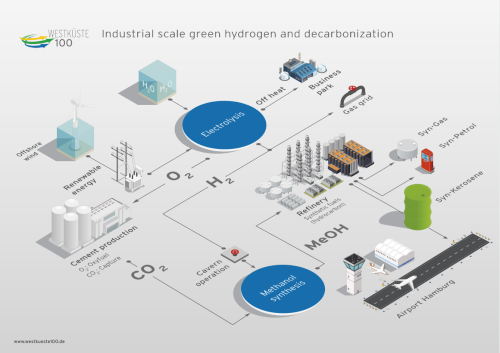 The partners plan to produce green hydrogen, transport it in the gas network, use it in industrial processes and to interlink different material cycles within the existing infrastructure. This will allow the decarbonization of industry, mobility and the heating market to be tested under real conditions.

An electrolysis plant with a capacity of 700 MW—this is our vision and the next milestone in implementing the development targets laid down in the national hydrogen strategy by 2030. Starting from today, the WESTKÜSTE100 partners will be working together to create this green future and build an ecologically and economically sustainable business model. We see the energy transition as a cross-sectoral endeavour. With industry, science and politicians all pulling together, our 700 MW vision will become reality.

—Jürgen Wollschläger, managing director of Raffinerie Heide and coordinator of the WESTKÜSTE100 project.

The funding approval enables work to begin on the first phase of the project, which is set to run for five years. A newly formed joint venture, H2 Westküste GmbH, comprising EDF Deutschland, Ørsted and Raffinerie Heide, is to build a 30 megawatt electrolyzer which will produce green hydrogen from offshore wind energy and provide information on the operation, maintenance, control and grid compatibility of the equipment.

With the adoption of the national hydrogen strategy at the beginning of June 2020, green hydrogen has become the key element in Germany’s energy transition. For us at Raffinerie Heide, the funding approval received today fires the gun to go all out in creating a new, green business model around the manufacture and exploitation of green hydrogen for the future. In building and commissioning an industrial-scale electrolysis plant on our site we will become an active part of the industry of tomorrow.

The WESTKÜSTE100 project is linking different sectors within an existing regional infrastructure. This includes the integration of green hydrogen in the existing process at Raffinerie Heide in a move intended to replace the use of grey hydrogen. In addition, part of the generated hydrogen will be transported via a newly built hydrogen pipeline to Heide’s municipal utility for transfer to the natural gas grid. In a future stage, there are plans to supply a hydrogen filling station.

All the milestones that are devised during the WESTKÜSTE100 project form the basis for the next, scaling stages. The vision for all partners is to build a 700 MW electrolysis plant, with the future prospect of making use of the waste heat and oxygen arising during the electrolysis process. Further plans include the production of climate-friendly aviation fuels and large-scale supply to gas grids.

In the future manufacture of fuel, hydrogen from electrolysis and the unavoidable CO2 from a regional cement plant in Schleswig-Holstein will be used in the process. During the initial phase of the WESTKÜSTE100 project preparations will be made for converting the Lägerdorf cement plant to a more environmentally friendly (oxyfuel) combustion process.

In the next stage of the project, scaling of the electrolysis plant in the order of 700 MW is planned, for which the electricity will be generated by an offshore wind farm. The project work conducted as part of WESTKÜSTE100 will lay the foundation for this and create the necessary know-how.