Hermeus Corporation, an aerospace start-up developing Mach 5 commercial aircraft, has won a $1.5-million SBIR Phase II award with the US Air Force and the Presidential and Executive Airlift Directorate to work toward hypersonic travel for the Department of Defense. This award comes under an Other Transaction For Prototype Agreement Direct to Phase II contract through AFWERX after Hermeus successfully tested a Mach 5 engine prototype in February 2020.

AFWERX is a US Air Force program intended to foster a culture of innovation within the service. Encompassing a number of programs supported with relatively small amounts of funding, the initiative is intended to circumvent bureaucracy and engage new entrepreneurs in Air Force programs.

The Presidential and Executive Airlift Directorate is responsible for the life cycle management of VC-25A and VC-25B (the military version of the Boeing 747 operated as Air Force One), as well as a number of executive and special mission aircraft, such as Gulfstream-based aircraft.

The effort is focused on rapidly assessing modifications to Hermeus Mach 5 aircraft to support the Presidential and Executive Airlift fleet. The contract supports the evaluation of potential hypersonic military transports for a 9-19-seat aircraft, including for the executive airlift mission, according to Aviation Week Defense Editor Steve Trimble. 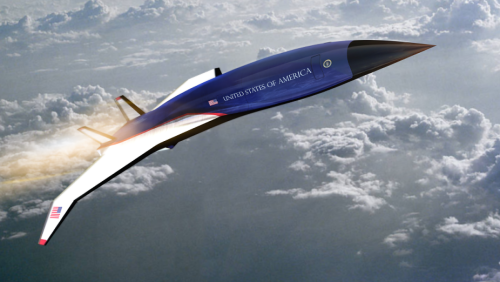 Early integration of unique Air Force requirements for high-speed mobility and evaluation of interfaces between high-speed aircraft and existing communications, airport, and air traffic control infrastructure lays the groundwork for a seamless transition to service. 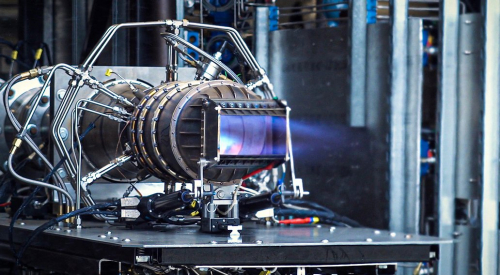 Leaps in capability are vital as we work to complicate the calculus of our adversaries. By leveraging commercial investment to drive new technologies into the Air Force, we are able to maximize our payback on Department of Defense investments. The Presidential and Executive Airlift Directorate is proud to support Hermeus in making this game-changing capability a reality as we look to recapitalize the fleet in the future.

Preceding the award, the Hermeus team designed from scratch, built, and successfully tested a Mach 5 engine prototype, in only 9 months. The test campaign both served as risk reduction for Hermeus’ turbine-based combined cycle engine architecture and illustrates the team’s ability to execute with schedule and funding efficiency.

The Hermeus founders consist of alumni from SpaceX and Blue Origin. Additionally, all four worked together at Generation Orbit, where AJ Piplica served as CEO and Glenn Case, Mike Smayda, and Skyler Shuford served as technical directors. While there, they led the development of the X-60A, a hypersonic rocket-plane and the Air Force’s newest X-Plane.

Two questions about this Mach 5 Exec Jet:
1. Is the fuel cryogenic (LH2 or LNG) or jet fuel based (JP-7 like the SR-71 or another endothermic fuel)?
2. If it uses jet fuel, does the Pre-cooler heat exchanger use the fuel or another indirect cooling fluid, e.g. Helium similar to the Reaction Engines SABRE or possibly Supercritical CO2?

I would like to see a Supercritical CO2 Pre-Cooler use something like the GE UPHEAT (Ultra Performance Heat Exchanger Enabled by Additive Technology) heat exchanger. This Pre-cooler could then be coupled to a GE-NASA Revolutionary Turbine Accelerator (RTA) Mach 4 Turbine Based Combined Cycle engine. The Pre-Cooler would enable Mach 5 speeds.

Whatever the tech I wish Hermeus well. Particularly, since one of the co-founders ( A.J. Piplica) is an alumnus of Georgia tech like myself.

The engine has a pre-cooler, which pretty much confirms that the fuel is hydrogen.

While it is true that Pre-Cooler technology to date (Japan JAXA, Reaction Engines SABRE, and Space Engine Systems DASS GN1 engine) all are cryogenic.
This is not true for Hypersonic Scramjet engines proposed by the Lockheed SR-72 (which uses an Aerojet Rocketdyne Turbine Based Combined Cycle engine) or the Boeing Valkyrie 2 (which uses a Northrop - formerly Orbital/ATK scramjet engine). Both of these engines use jet fuel and require cooling for their engines (a possible example is the Reaction Systems "Advanced Endothermic Fuel System for Hypersonic Propulsion" (reference: http://www.rxnsys.com/An-Advanced-Endothermic-Fuel-System-for-Hypersonic-Propulsion.html).

A little more info on Hypersonic Cooling tech. Check out Northrop Patent US7963100B2 - Cooling system for high-speed vehicles and method of cooling high-speed vehicles, it may comprise a combustor wall at least partially enclosing a combustor and which is cooled using a coolant circulating in a Brayton cycle.
Boeing already set the record with the X-51 Scramjet and Northrop has set a record for Scramjet propulsion, check: https://www.thedrive.com/the-war-zone/29307/air-force-reveals-tests-of-supposed-record-setting-scramjet-engine-from-northrop-grumman.