LIDAR (Light Detection and Ranging) is considered to be the key technology for self-propelled vehicles. Frequency Modulated Continuous Wave (FMCW) LIDAR—a cumbersome abbreviation for a disruptive technology—will facilitate the breakthrough in autonomous driving and, according to experts, will completely force the currently used Time of Light (TOF) LIDAR systems out of the market.

Scantinel Photonics GmbH, a venture company supported by ZEISS Ventures, is the only European company in the field of FMCW LIDAR. Scantinel can draw on decades of experience in the ZEISS Group’s optics, photonics and semiconductor technology sectors, among others.

Autonomous driving has the potential to turn the entire classical supply chain in the automotive industry upside down or to have completely new players appear on the scene. The Intel company Mobileye was recently allowed to test-drive the system in the Bavarian capital Munich. Intel bought the company in 2017 for 15.3 billion US Dollars. Amazon has just bought the startup Zoox, a company for autonomous driving, for 1.2 billion dollars.

It is not by coincidence that the name LIDAR is reminiscent of radar. Both methods are used for detection and distance measurement by analyzing reflected wave patterns.

FMCW RADAR is already being offered as a standard driver assistance system in the automotive industry. In contrast to radar, FMCW LiDAR does not use radio waves but light in the form of lasers, thus enabling better image resolution and improved detection of objects, such as pedestrians and cyclists.

This FMCW LiDAR technology has significant advantages over conventional methods.

One of the reasons why FMCW LIDAR technology is so powerful is that the sensors used can detect the smallest possible amount of light—a photon. Scantinel’s FMCW LIDAR operates in the wavelength range of 1550 nm, thus the laser meets the required high standards of eye safety. In addition, it can provide accurate measurement results even under limited visibility conditions, for example in fog, rain or snowfall.

Scantinel also uses a newly developed, unique beam deflection system that does not require any mechanical components, such as MEMS. 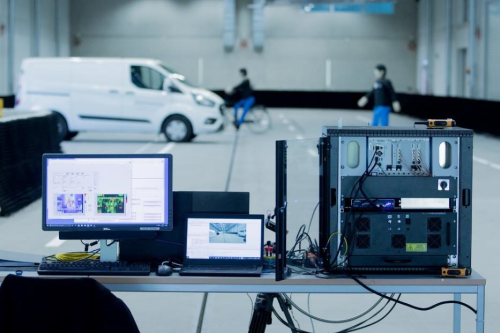 Most common Time of Flight (ToF) LIDAR systems operate at wavelengths of 850 and 905 nm, which are very close to the visible light spectrum. The maximum laser power is therefore limited and the range is usually less than 100 m.

When driving autonomously, however, it is essential to detect objects at distances of 250 meters and more in order to brake in time or initiate an evasive maneuver. The higher the range of the LIDAR system, the more time it takes the car or driver to react to unexpected obstacles. Even fractions of a second make a big difference in terms of safety and comfort.

By using proprietary linear chip technology, the Scantinel FMCW Sensor can instantly measure both distance and speed of any measurement point. The Scantinel system is designed to respond only to its own light pulses due to the coherent measurement process. If the returning light does not match the originally emitted light, the FMCW sensor can filter out this data point. The incoming data is also processed more quickly, since the speed from changes in object position no longer needs to be estimated, as with ToF systems, which reduces computing power and cost.

By far the most important advantage of the Scantinel technology, however, is the integration of all components onto a single chip, a so-called PIC (Photonic integrated Circuits), to achieve the ambitious cost targets of LIDAR systems.

Chip-integrated waveguides for wavelengths in the range of 1550 nm are already being used by the millions in telecommunications and opto-electronic applications in data centers and are therefore available on the market at very low cost.

They also do not require moving elements, such as in the so-called MEMS based LIDAR technology, which makes the Scantinel system much more robust and less susceptible to interference.

Scantinel has a successful FMCW LIDAR demonstrator in customer use and is in discussions with all leading automotive and system suppliers.