This marks the first time that a Visconti family processor will be mass-produced for a company outside Japan.

The China-New Car Assessment Program, safety testing operated by the government’s China Automotive Technology and Research Center Co., introduced evaluation of emergency braking systems in 2018. The decision recognized the growing number of vehicles incorporating ADAS functions on China’s roads, with the Chinese market for vehicle-mounted cameras expected to grow fourfold from 2019 to 2030, to almost US$6.1 billion.

The Visconti 4 image recognition processor integrates eight media processing engines, allowing it to execute eight applications simultaneously. It detects and analyzes camera-generated images, and can recognize traffic lanes; nearby vehicles, both parked and moving; traffic signs and signals; the headlights of oncoming vehicles; plus the most vulnerable road users of all, bicyclists and pedestrians. 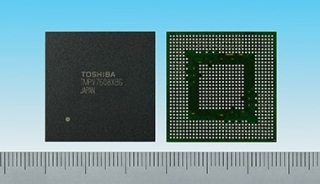 Visconti 4 integrates a Toshiba-developed image recognition algorithm, Enhanced CoHOG Accelerator, that refines processing of differences in luminance between objects and their backgrounds, significantly improving detection of pedestrians at night and in low light conditions.

Visconti 4 also consumes less power than CPUs or GPUs because it executes image recognition on the hardware itself.

The versatility of Visconti family image-recognition processors positions them for use in diverse applications other than vehicles. They are already integrated into multi-function image sensors and surveillance camera systems, and are under consideration for deployment in construction and agricultural machinery and trains.