CAAFI, a coalition of airlines, aircraft and engine manufacturers, energy producers, researchers, international participants and US government agencies, has been working on SAF in 2006. CAAFI’s goal is to promote the development of alternative jet fuel options that offer equivalent safety and favorable costs compared with petroleum-based jet fuel, while offering environmental improvement and energy supply security for aviation. 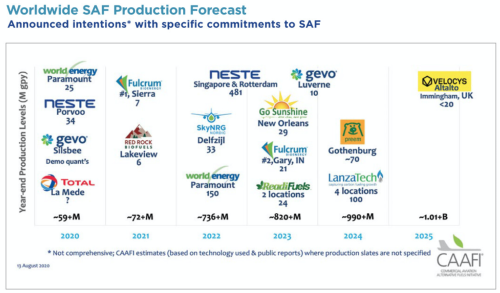 The new guide, titled Fueling the Future, serves as an educational and informational resource about the practicalities of SAF development, industry adoption, and pending expansion of supply and use, primarily from the perspectives of the business aviation community.

SAF blending components are made from bio-based or other circular-economy feedstock sources. On a gallon-per-gallon basis, these low-carbon components often reduce net lifecycle CO2 emissions in excess of 50%, versus conventional jet fuel. Industry innovators are additionally planning to produce SAF blending components with deeper reductions, and in some cases more than 100%, making the fuels carbon-negative.

SAF is a proven and trusted replacement for traditional jet fuel that will help lower the industry’s carbon footprint. SAF has been used continuously at select airports since 2016, and its production is expected to scale significantly during the next five years.

The coalition’s Steering Committee includes dozens of aviation businesses, representing every point in the SAF development-and-supply chain, and all of which provided real-world expertise in the development of the guide.

The SAF Coalition’s guide builds upon a host of initiatives to educate industry leaders, policymakers and others on the benefits and viability of SAF.

For example, in January 2020, the coalition introduced SAF for business aviation consumption at Zurich Airport, in conjunction with the World Economic Forum. Similar, previous events were held at airports in Van Nuys, CA, Farnborough, UK, Geneva and Las Vegas.

On 14-15 Sept., the Coalition is hosting the Business Aviation Global Sustainability Summit. Experts along every point on the value chain—OEMs, producers, providers/FBOs, operators and others, including government leaders—will discuss and determine how to increase the production, availability and use of SAF.