An international team led by Professor Matthias Arenz from the Department of Chemistry and Biochemistry (DCB) at the University of Bern has succeeded in using a special process to produce a fuel cell electrocatalyst without a carbon carrier, which, unlike existing catalysts, consists of a thin metal network and is therefore more durable.

The results have been published in Nature Materials. The study is an international collaboration between the DCB and, among others, the University of Copenhagen and the Leibniz Institute for Plasma Science and Technology, which also used the Swiss Light Source (SLS) infrastructure at the Paul Scherrer Institute. 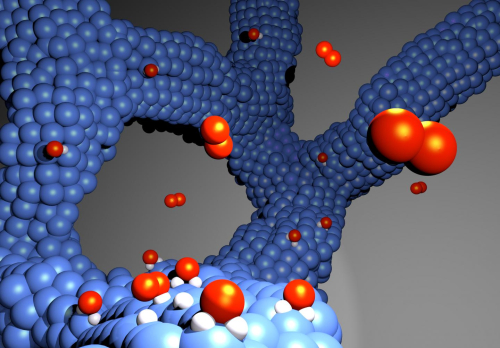 The new electrocatalyst for hydrogen fuel cells consists of a thin platinum-cobalt alloy network. Unlike the catalysts commonly used today, it does not require a carbon carrier. Credit: Gustav Sievers

Research and development of proton exchange membrane fuel cells (PEMFCs) have made substantial progress in recent years and reached industrial maturity in the serial production of fuel-cell cars by several automotive companies. This advancement is partly due to the rapid progress in engineering, but also due to more efficient fuel-cell catalysts. At a research level, several catalysts have already shown catalytic activities capable of further reducing the amount of platinum (Pt) by a factor of five to ten, which is required for large-scale applications. Most catalysts reach high mass activities (MAs) by increasing the specific activity (SA) at the extent of a reduced electrochemical surface area (ECSA) as compared with those of standard platinum/carbon (Pt/C) catalysts.

… Automotive fuel-cell systems, however, operate at high current densities and thus relatively large overpotentials. As the overpotential increases, the nature of the rate-determining step changes and mass transfer becomes crucial for the performance. As a consequence, at low overpotentials, and thus low current densities, the reduced ECSA of most catalyst concepts does not impact their performance. However, at higher overpotentials, for example, 0.5V, which is often reached under fuel-cell operation, the charge-transfer steps are fast on an active catalyst and mass transfer, especially oxygen resistance, becomes increasingly rate limiting. Thus, the power density depends on the ECSA per mass and is key to achieve improved SAs and high ECSAs to realize a high performance in an automotive PEMFC application.

… Here we present a concept for a self-supported catalyst capable of combining a high SA with an unprecedentedly high ECSA.

For the fuel cell to produce electricity, both electrodes must be coated with a catalyst. Without a catalyst, the chemical reactions would proceed very slowly. This applies in particular to the second electrode, the oxygen electrode. However, the platinum-cobalt nanoparticles of the catalyst can “melt together” during operation in a vehicle. This reduces the surface of the catalyst and therefore the efficiency of the cell.

In addition, the carbon normally used to fix the catalyst can corrode when used in road traffic. This affects the service life of the fuel cell and consequently the vehicle.

Our motivation was therefore to produce an electrocatalyst without a carbon carrier that is nevertheless powerful.

—Professor Matthias Arenz from the Department of Chemistry and Biochemistry (DCB) at the University of Bern, corresponding author

Previous, similar catalysts without a carrier material always only had a reduced surface area. Since the size of the surface area is crucial for the catalyst’s activity and hence its performance, these were less suitable for industrial use.

The researchers used a process called cathode sputtering. With this method, a material (here, platinum or cobalt) is atomized by bombardment with ions. The released gaseous atoms then condense as an adhesive layer.

With the special sputtering process and subsequent treatment, a very porous structure can be achieved, which gives the catalyst a high surface area and is self-supporting at the same time. A carbon carrier is therefore superfluous.

This technology is industrially scalable and can therefore also be used for larger production volumes, for example in the automotive industry. Our findings are consequently of importance for the further development of sustainable energy use, especially in view of the current developments in the mobility sector for heavy goods vehicles.