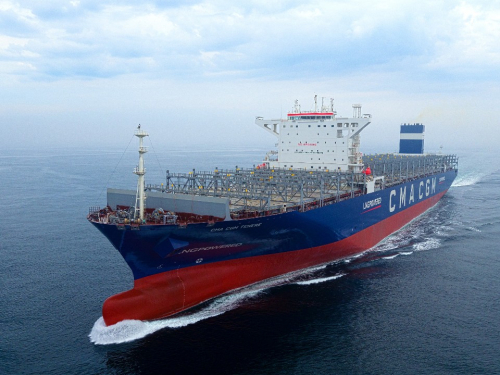 HHI Group announced that Hyundai Samho Heavy Industries (HSHI), its shipbuilding subsidiary, has recently completed sea trial of the 14,800 TEU containership for Singapore-based Eastern Pacific Shipping (EPS) in the presence of some 130 people, including those from the shipowner and the classification society.

The vessel, measuring 366 meters in length, 51 meters in width and 29.9 meters in depth, marks the world’s first VLCS operating on LNG.

The ship is equipped with a 12,000㎥-class large LNG fuel tank, giving the vessel enough fuel capacity for an Asia-Europe round trip on a single filling. The tank is composed of 9% nickel steel which has superior strength and impact toughness even at a cryogenic temperature (-163 °C).

The ship is also outstanding in terms of safety and container-loading efficiency due to the optimal layouts and designs applied to the LNG fuel tank, fuel gas supply system (FGSS) and dual-fuel engine.

It marks the first in a series of six LNG-fueled ships of the same size and type that HSHI has been constructing over the past years after signing an agreement with EPS in April 2018, with the last delivery scheduled for the third quarter of 2022.

To date, HHI Group has won orders to build a total of 44 vessels operating on LNG, including bulk carriers, tankers and container ships, earning the leading spot in global shipbuilding orders. Further, in July 2018, the Group became the world’s first to successfully deliver an LNG-fueled 114,000-ton class large crude carrier, which was crowned as the winner of the Next Generation Ship Award at Nor-Shipping 2019 held in Oslo, Norway, one of the three largest international maritime fairs in the world.