In addition to the new H Series, Proterra will continue to offer its S Series battery packs, which powers Proterra’s fleet of battery-electric transit buses and other Proterra Powered vehicles. 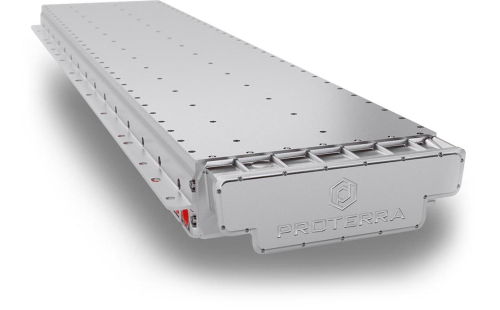 S Series battery packs have a width of 860 mm and can contain up to 113 kWh of energy storage per pack.

The H and S Series battery packs each leverages their own uniquely sized module. Both modules can be produced at four different voltage ratings, offering OEMs the flexibility to vary voltage and energy requirements to meet their individual needs. Utilizing top-tier NCM 811 lithium-ion cylindrical cells, Proterra’s battery platform is scalable in all dimensions and can support different vehicle voltages up to 1200 VDC and 6 MWh in size.

Passive Propagation Resistance, or PPR, is a foundational requirement of all Proterra battery packs. In the rare event of a latent cell failure, a localized thermal event is completely isolated and will not spread to neighboring battery cells.

All Proterra battery products undergo rigorous testing to ensure they can withstand a full service life under the toughest conditions, including extreme heat, cold, water submersion, vibration, and impact.

Vehicle makers could band together to get economies of scale in battery packs, motors and controllers. Standardize and combine production to bring costs down.