New Zealand’s Hiringa Energy and US-based HYZON Motors Inc. have signed a Heads of Agreement that secures access for Hiringa and its fleet partners to the supply of hydrogen-fuel-cell-powered zero-emission Heavy Goods Vehicles (HGVs). 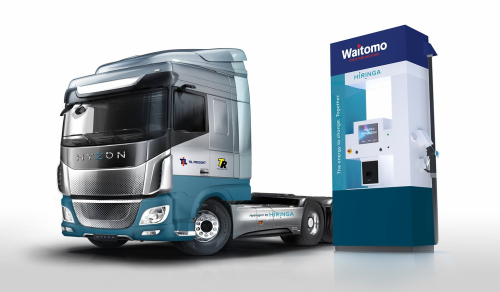 The heavy fuel cell electric vehicles (FCEVs) will be tailored to meet the demanding and unique requirements of the New Zealand heavy freight and road transport sector; it is expected that the vehicles will enter service in New Zealand from the start of 2021.

This agreement supports Hiringa and its partners’ strategy to roll out over 1,500 FCEVs by 2026, driving the cost of the technology down and unlocking widespread adoption of zero emission heavy transport. (Earlier post.)

The trucks will come in a variety of right-hand drive configurations with a gross combined mass (GCM) of more than 50t and suitable for New Zealand operators including 8x4 and 6x4 rigid and prime movers with driving distances of up to 500km.

FCEV trucks have the benefit of being an electric vehicle, but with a similar weight and power output to regular diesel-powered trucks, and have a similar refueling time of around 15-20 minutes.

This is an exciting milestone for Hiringa Energy and our partners. It comes on the back of over three years’ of detailed planning and analysis working together with heavy fleet operators, government and leading technology vendors such as HYZON Motors.

The FCEV truck market is growing rapidly, with enormous demand coming out of the US and Europe. So, for New Zealand to be able to secure this agreement with HYZON demonstrates New Zealand’s leadership in how we are approaching the hydrogen FCEV opportunity.

We look forward to getting these trucks on our roads early next year and putting them through their paces prior to widespread rollout for the New Zealand trucking industry in 2022. These exciting trucks are a flavor of what’s to come with the growing applications for FCEV commercial and heavy vehicles in New Zealand.

This Heads of Agreement with Hiringa closely follows the signing of an agreement for HYZON to supply hydrogen fuel cell-powered coaches to Western Australian iron ore miner Fortescue Metals Group’s Christmas Creek operations. We are excited to be rapidly growing our presence in Australia and New Zealand and look forward to playing our part in the global decarbonization story.

The agreement includes a plan to introduce the technology into the country’s heavy trucking fleets, commencing with an initial validation phase, seeing 20 trucks deployed in 2021 and moving to large-scale commercial deployment from 2022 onwards.

The network will commence refueling operations in 2021, expanding to eight stations across the North and South Islands by 2022 as part of a Phase 1 network infrastructure plan, servicing 100% of the North Island and 82% of the South Island heavy freight routes.

The Phase 2 expansion will increase the network to at least 24 stations by 2025, providing coverage for 95% of all heavy vehicle routes throughout New Zealand.

This news builds upon the continued momentum with the New Zealand government’s recent provisional support of $20 million towards the establishment of Hiringa’s nationwide refuelling network. This support demonstrates the advanced stage of development of the company’s plans and the government’s commitment to zero emissions transport.

HYZON is a fuel cell heavy vehicle manufacturer headquartered in New York. The company is led by experienced fuel cell veterans from Horizon Fuel Cell Technologies and General Motors, with more than 100 years’ combined experience in high-power density fuel cell system commercialisation. HYZON has plans to deploy over 2,000 hydrogen heavy vehicles over the coming three years in New Zealand, Australia, the US and Europe.

Who the heck could have guessed that the two leaders in FCEVs for heavy transport would be New Zealand and Switzerland?

Not me, for sure!

From the previous article linked above:

'Heavy transport makes up only four percent of our vehicles, but they’re responsible for over 25 percent of our total vehicle emissions. Hydrogen is the key technology that will allow these fleets to stay on the road—a mass-market, clean energy solution that can have a real impact on reducing our transport emissions.'

The $20 million subsidy from the NZ governement looks as though it will have a massive impact in attaining low carbon ZEV transport compared to the huge subsidies thrown at BEV cars,.

It depends on circumstances, it is not an all or nothing one size fits all.

I'm not familiar with the huge NZ BEV subsidies. I asked the Googles about them and the response was up to six million dollars per year. Is that what you are referring to?

Your valid point is that ZEV credits get more bang for the buck if they are directed at heavy transport. That is what China did when they converted hundreds of thousands of their busses to BEBs a few years ago. It put a dent in their national diesel consumption.

Such a informative guide, awesome mate.