Solid-state battery company Quantumscape to list on NYSE; $3.3B valuation

QuantumScape Corporation, a developer of next generation solid-state lithium-metal batteries for use in electric vehicles, and Kensington Capital Acquisition Corp., a special purpose acquisition company (SPAC), announced a definitive agreement for a business combination that would result in QuantumScape becoming a publicly listed company. Upon closing of the transaction, the combined company will be named QuantumScape and is expected to remain listed on the NYSE and trade under the new ticker symbol “QS”.

In the decade since the company was founded, QuantumScape has been exclusively focused on developing solid-state batteries and designing a scalable manufacturing process to commercialize its battery technology for the automotive industry. QuantumScape believes the proceeds from this transaction will fully fund the company through the start of production via its joint venture with the Volkswagen Group. 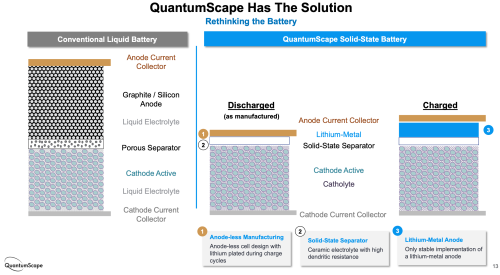 Ten years ago, we embarked upon an ambitious goal that most thought was impossible. Through the tireless work of QuantumScape's more than 200 scientists and engineers, and our partnership with Volkswagen since 2012, we have developed a new battery technology that is unlike anything else in the world. We are now excited to partner with Kensington's unique team of world-class automotive executives, who share our vision of a cleaner and safer future powered by QuantumScape. This vote of confidence from investors, and the capital provided by this transaction, will drive a more sustainable future for generations to come.

Former Tesla Chief Technology Officer and current QuantumScape board member JB Straubel said that “QuantumScape’s solid-state anode-less design represents the most elegant architecture I’ve seen for a lithium-based battery system, and the company has an opportunity to redefine the battery landscape.”

Transaction overview. The business combination values QuantumScape at an implied $3.3 billion pro forma enterprise value. The boards of directors of both Kensington and QuantumScape have approved the proposed transaction, which is expected to be completed in the fourth quarter of 2020, subject to, among other things, the approval by Kensington's stockholders and satisfaction or waiver of the other conditions stated in the definitive documentation.