The Swiss company Climeworks is building the world’s largest direct air capture (DAC) and storage facility for converting atmospheric CO2 to rock in Iceland. Audi is partnering with the Zurich-based environmental start-up and promoting a future technology with the project.

With direct air capture technology, carbon dioxide is extracted from the ambient air and air free of CO2 is returned to the atmosphere. Climeworks’ new facility in Iceland transports the CO2 filtered out of the air below the Earth’s surface, where natural processes then mineralize it. The carbon dioxide is thus permanently removed from the atmosphere. 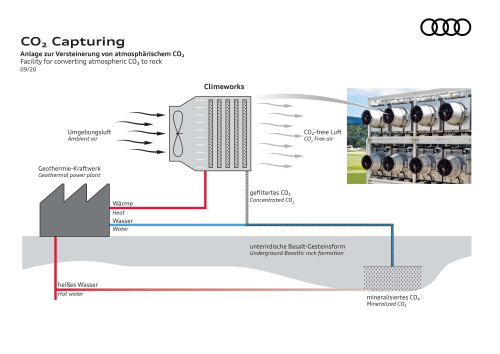 The facility first draws in air and feeds it into the CO2 collector, which contains a selective filter material. This uses a specially developed adsorbent to bind the CO2 in the air. When this filter is saturated with CO2, it is heated to 100 ˚C using waste heat from a nearby geothermal plant to release the CO2 molecules.

Water from the Hellisheiði power plant then flows through the facility and transports the carbon dioxide roughly 2,000 meters below the surface of the Earth. The CO2 molecules react through natural mineralization processes with the basalt rock and are converted to carbonates over a period of several years, thus permanently storing the CO2 underground. The water returns to the cycle of the geothermal power plant.

The facility will operate 24 hours a day, seven days a week, and will filter 4,000 metric tons from the atmosphere each year. One quarter of that will be credited to Audi. 80,000 trees would be needed to bind this amount naturally.

The direct air capture technology from Climeworks boasts two major advantages: Lifecycle analyses show that 90% of the CO2 filtered out of the air is effectively and permanently stored underground. This high reduction capacity makes the facility particularly efficient. The technology can also be scaled up to the megaton-per-year range and thus harbors great potential from the future.

Iceland is one of several places on Earth offering the ideal conditions for this process. Its volcanic origin makes the country one of the world’s most potent geothermal regions. The particularly high geothermal energy means that the Earth’s heat can be converted to electricity cost-effectively and virtually CO2 neutrally. Furthermore, the rock in Iceland has the ideal composition for storing large amounts of CO2. 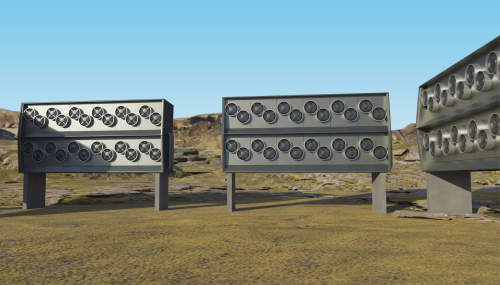 From a scientific perspective, the adsorption of carbon dioxide from the atmosphere is an important measure in addition to reducing emissions for reaching the Group’s climate targets. We are contributing to decarbonization through our involvement in the Climeworks CO2 capturing project.

Audi is once again following its holistic approach here and is participating in the project to promote the development and meaningful implementation of innovative climate protection technologies.

Audi has been supporting the development of CO2 capturing technology from the Zurich-based environmental start-up Climeworks since 2013. Two years ago the two companies built a facility in Hinwil, Switzerland, that filters CO2 from the air and provides it to the beverage industry, where it is converted to carbonic acid. Audi is extending this successful partnership with the project in Iceland and taking it to the next level.

Audi is also supporting the Swiss start-up with its technological know-how, such as for the development of new heat exchanger concepts.

By 2025, the Volkswagen Group wants to reduce the ecological footprint of cars and light utility vehicles along the entire value chain by 30% relative to 2015. Audi has therefore set ambitious targets in all areas of the company with the goal of achieving net CO2-neutrality company-wide by 2050.

If I did the computation right, 2000 of these should cover Audi's annual car co2 emission

If all the world was Iceland, we could run everything on hydropower and grow bananas in geothermal-heated greenhouses through the dead of winter.

This might work for one small piece of the global economy.  What do we do for the rest of it?  Are there enough sources of mid-grade waste heat that doesn't generate CO2?  Maybe using PV fields to heat water as well?  If not, this thing is clever but a dead end.

I think it fallacious to dismiss or downrate technologies on the grounds that they may not be a total solution for the whole world.

More relevant and realistic is to look at whether they can provide a cost effective alternative at good scale.

The good thing about CO2 is that you can take it out anywhere in the world, and it will have the same effect as though it were done at source.

And this is one of a number of interelated technologies which can all help each other and provide alternatives in different circumstances to cumulative effect.

For instance a variant of the technogy could be used on the concentrated streams of CO2 from industrial emissions, and the carbon processed partially using waste industrial heat for fuel or solid carbon products as well as sequestration, which is also not limited to the variant Iceland uses but includes depleted NG wells etc.

Power plants produce CO2 and waste heat,
it is not an all or forget about it world.

I think it fallacious to dismiss or downrate technologies on the grounds that they may not be a total solution for the whole world.

More relevant and realistic is to look at whether they can provide a cost effective alternative at good scale.

I think you just re-stated my point.  If this is a solution that only works in Iceland, it's only worth so much investment.  If it's something that works anywhere you've got e.g. a nuclear power plant (and requiring heat at 100°C pretty much says it will), it's got much wider applicability and is worth much more investment.

If you can economically combine it with something like this electrolytic CO2-to-EtOH cell you've got a way to replace many fossil fuels.  You just have to have cheap enough energy to feed the process.

This really does come down to the price of energy.  Nuclear heat is pretty cheap, but the elecric power to convert CO2 to fuels is several times more so.  There's a similar relationship for PV, and wind generates almost no waste heat.  You're going to need both.