A new analysis of commercial aircraft fuel efficiency from the International Council on Clean Transportation (ICCT) finds that the UN’s aircraft CO2 standard lags current technology by more than a decade.

The ICCT first analyzed the historical trends in fuel efficiency improvement of new commercial jet aircraft in 2009. In 2015, the organization updated the study and refined the analysis by using the UN’s International Civil Aviation Organization’s (ICAO) cO2 metric value (MV). 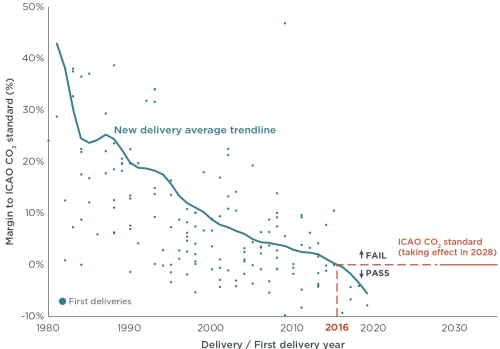 The new anaysis updates the previous work by taking into account new aircraft types and deliveries from 2015 to 2019, and by including dedicated freighters delivered from 1960 to 2019.

The authors followed the general methodology of the 2015 paper and assessed fuel burn via both block fuel intensity in grams of fuel per tonne-kilometer and the MV, which aims to provide a “transport capability neutral” means of regulating aircraft fuel burn.

The average aircraft fuel burn reduction stagnated in the 2000s; this latest analysis shows a return to 1% or more average annual reduction rate in the most recent decade. This is largely attributable to the introduction of various new, more fuel-efficient narrowbody and widebody aircraft models, the authors said.

Key findings of the report include:

Despite the fuel efficiency improvements, total CO2 emissions from commercial aviation have nonetheless increased alongside this trend. Meaningful aircraft emission standards will be pivotal for managing the climate impact of aviation, the ICCT said.

The airlines survived at oil at $147 / barrel in 2008, so $50 / ton CO2 wouldn't kill them either. Maybe you could impose it as a landing charge (say Europe wide).
Might be hard to get the US or China to go along with it.

Also, you want people to fill planes and not fly them 1/2 full as is currently the case.
You might have to force airlines to do a "real time code share" where they move passengers to another airline (on busy routes) to avoid flying 3/4 empty planes around.