Lucid Motors unveiled the Lucid Air battery-electric luxury sedan, which will start at less than US$80,000. With up to 1,080 horsepower available in a dual-motor, all-wheel-drive architecture, the Lucid Air is able to achieve quarter-mile times as quick as 9.9 seconds on a consistent, repeatable basis. 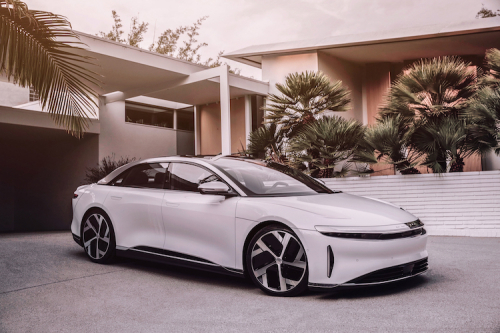 To date, it is the only electric sedan able to achieve a quarter-mile time under 10 seconds. The power of the Lucid Air is complemented by an available extended-range capability that achieves an estimated EPA range of up to 517 miles on a single charge.

The Lucid Air will be available initially in North America, offered in four model ranges:

Additional versions of the Lucid Air and new Lucid models will be shared in the future, with the following providing specs on currently planned Lucid Air models:

The heart of the Lucid Air lineup will be the Air Touring and Air Grand Touring models, which offer 620hp and 800hp respectively. The Air Grand Touring will have range available up to the recently announced estimated EPA rating of 517 miles.

Reservations are open now for customers across the US and Canada, as well as in select countries in Europe and the Middle East. Those who are inspired can reserve the Lucid Air via a US$1,000 refundable deposit or the limited production Dream Edition with a US$7,500 refundable deposit.

The luxury sedan will also be available through the 20 Lucid Studios and Service Centers that are planned to be open across North America by the close of 2021. European and Middle East market delivery dates, pricing, and sales and service center details will be announced at a later date.

The Lucid Air will offer the capability to charge at rates of up to 20 miles per minute when connected to a DC Fast Charging network. For owners charging their Lucid Air in real-world conditions on the road, that can translate into 300 miles of range in 20 minutes of charging.

The Lucid Air is also the most aero-efficient luxury car, with tests completed at Windshear’s advanced rolling-road wind tunnel verifying a coefficient of drag of 0.21.

The Lucid Air is based on the Lucid Space Concept, which capitalizes upon the miniaturization of Lucid’s in-house developed EV drivetrain to optimize interior cabin space. The concept is central to the architecture of the Lucid Electric Advanced Platform (LEAP) upon which the Lucid Air, and forthcoming Lucid vehicles, will be built.

By simultaneously making smaller yet more powerful electric motors and improving the packaging of the entire electric powertrain, Lucid is able to reclaim that space for passengers and their comfort.

Production at the Lucid Motors factory in Casa Grande, Arizona, will begin in the coming months, with deliveries of the Lucid Air to North American customers to commence in spring of 2021.