With a 1% increase in sales and increasing battery pack size, all-electric vehicles (EVs) captured a record amount of total plug-in vehicle battery capacity sold in 2019, 17.4 gigawatt-hours, according to analysis by Argonne National Laboratory.

Plug-in hybrid electric vehicles (PHEVs) accounted for a smaller portion of total plug-in vehicle battery capacity due to their lower sales volumes and because they require smaller battery packs than EVs, since they have gasoline-powered engines to extend total vehicle range.

PHEV sales decreased 32% from 2018 to 2019, about the same as the decrease in PHEV battery capacity.

Calendar year 2018 was the first full year of Tesla Model 3 sales, which accounted for the large increase in total battery capacity between 2017 and 2018. 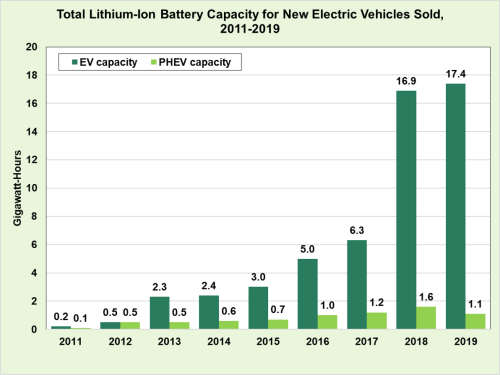