Frontier Energy, Inc., in close collaboration with GTI and The University of Texas at Austin, has launched a US Department of Energy project, Demonstration and Framework for H2@Scale in Texas and Beyond. The project is supported by DOE’s Hydrogen and Fuel Cell Technologies Office within the Office of Energy Efficiency and Renewable Energy.

H2@Scale in Texas and Beyond intends to show that renewable hydrogen can be a cost-effective fuel for multiple end-use applications, including fuel cell electric vehicles, when coupled with large, baseload consumers that use hydrogen for clean, reliable stationary power. 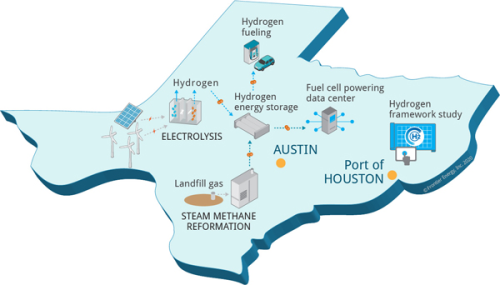 The project started on 1 July 2020 and will continue for three years. The project partners committed half of the funding for the $10.8-million project that will demonstrate how hydrogen production and use can enable grid resiliency, align domestic industries, increase competitiveness, and promote job creation.

Greenwashing BS at its most obvious

Turning RNG into H2 is useful.