Extended road testing of the vehicle is underway in Asia and represents a significant step towards the commercialization of e1’s onboard hydrogen generation technology. The company stated that it is becoming increasingly engaged with partners around the world on a wide range of hydrogen energy projects. 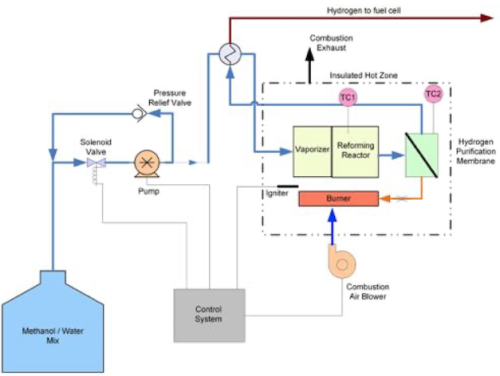 The M-Series produces no particulate matter in the generation of hydrogen, and when using methanol produced from waste gas streams such as landfill gas or biogas, e1’s hydrogen generation solution can be carbon-neutral.

CO-WIN is both a valued strategic partner and licensee of e1, and we are excited to be working with them on this fuel cell truck project. The hydrogen generation technology being deployed is unique to e1 and is a game changer for clean transportation. To my knowledge, no other company in the world can provide a commercial onboard hydrogen generation product comparable to our M-Series product line. Our broad collaboration with CO-WIN is expected to result in the mass commercialization of fuel cell systems supporting not only transportation, but also telecom and distributed power applications throughout the Asian market.

Fuel cell vehicles typically require a pure grade of hydrogen in order to produce the electricity needed for propulsion. Historically, this hydrogen has been compressed and stored on the vehicle, which necessitates a costly network of hydrogen refueling stations to be developed. In many regions of the world, building out this infrastructure is simply not feasible, e1 said.

The methanol used by e1’s hydrogen generators requires a fraction of the space onboard the vehicle compared to compressed hydrogen, enabling significantly greater driving range between fueling. This range extension is critical for heavy- and medium-duty fuel cell trucks traveling long distances each day.

It will be interesting to see how this pans out against Mercedes liquid hydrogen path for heavy transport.

Methanol has around half the energy density by mass of diesel, and I can't find figures for the losses in conversion, although perhaps the water contribution mitigates it (?)

It's too bad we are wasting all this money trying to find ways the fossil fuel companies can continue polluting. The answer to transportation is already there in most cases, BEVs. The exceptions are to use hydrogen in aircraft and sea ships.

Mercedes did this with NECAR in the 90s.

The significance of the onboard methanol to H2 generator is that it eliminates the need to create a global H2 refueling structure at a tremendous cost, allowing for faster adoption of FCEV solutions.

BEV, FCEV, and methanol to H2/FCEV will all have their place in transportation. e1's technology is well suited for HD transport where extended range or high kWH applications are required to complete the vehicle mission. e1's technology is being tested for HD truck requiring 500 mi+ ranges, and in marine vessels where gas H2 / LH2 are not a good fit.

It makes a huge difference in volumetric hydrogen density as well.  The ultimate target for CH2 systems is a mere 50 grams per liter.  A liter of MeOH is a nominal 792 grams, which reforms to as much as 148.5 grams H2.  Methanol is also by far the easiest room-temperature liquid fuel to make from syngas.  If you can make syngas from renewable carbon like crop wastes, you can make carbon-neutral methanol.