Ford confirms construction of Rouge EV center to be home of electric F-150; production by mid-2022

Ford celebrated the production start of the all-new F-150 at the Ford Rouge Center and confirmed construction of the new Rouge Electric Vehicle Center where it will build the all-electric F-150 by mid-2022. 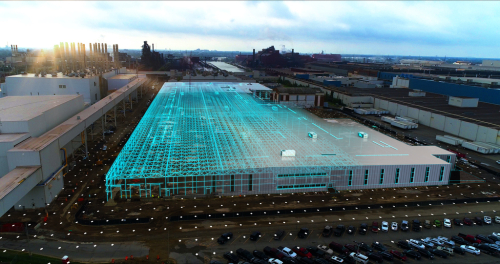 The new manufacturing center at the Dearborn-based Rouge Center, once complete, will add 300 jobs and is part of a $700-million investment in building the all-new F-150 lineup, including the first F-150 PowerBoost hybrid. The new jobs will support battery assembly and production of the F-150 PowerBoost hybrid and fully electric F-150.

The electric F-150, which is undergoing tens of thousands of hours of torture testing and targeting millions of simulated, laboratory and real world test miles, will be more powerful than any F-150 available today and deliver commercial and personal customers the lowest expected lifetime total cost of operation among F-Series trucks. Additionally:

A newly released study from Boston Consulting Group (BCG) found F-Series, America’s best-selling truck since 1977, is among the most valuable consumer goods in America and a key employment driver. Among the specific findings:

Hybrid/EV F150s will be a big seller.

I think that the EV F-150s will be a big seller to contractors as the overall cost per mile will be lower and the ability to have power at the job site will be a big plus. Most of these probably travel less than 70 or 80 miles per day.

Whatever works for cleaner air and less imported oil.