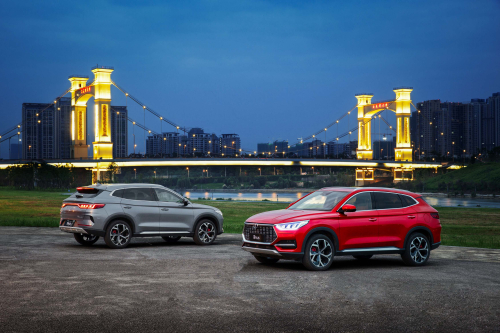 BYD intends for the Song PLUS to attack the mainstream SUV market in China synergistically with the Song Pro (introduced in 2019 in ICE, PHEV and EV versions).

The Song PLUS is positioned as a wide-body midsize SUV, with a size of 4,705/1,890/1,680mm and a wheelbase of 2,765mm, making it the widest SUV in its class to provide the most comfortable driving experience.

Due to its improved and efficient air intake system, advanced combustion system and a more intelligent thermal management system, the vehicle’s power and torque have been increased by 20%. The overall engine thermal efficiency has been improved by 38% and the maximum transmission efficiency reaches 95%, with its fuel consumption reduced by 15% per 100km, combining power and fuel economy.

In addition to a significant increase in power, the Song PLUS is equipped with three power modes, Eco, Normal and Sport, which provide distinct driving qualities and can adapt to different scenarios and driving needs under different road conditions. The shift advantages and fine adjustments of the new 7-speed wet dual-clutch gearbox allows for remarkably smooth power outputs.

The Song PLUS features a MacPherson strut front suspension and rear multi-link independent suspension chassis. Its 5.55-meter turning radius is the smallest and most precise in its class, creating a more agile and free-handling driving experience. 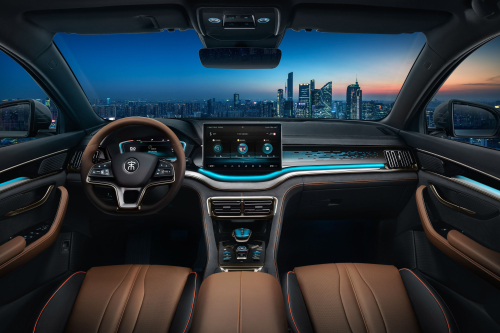 Technology. The Song PLUS is equipped with the DiLink 3.0 intelligent network connection system as a standard. 4 million+ apps can be downloaded at will, covering every need for navigation, interactive entertainment and connected travel.

All Song PLUS models are equipped with the standard OTA remote upgrade function. The Song PLUS is also equipped with an NFC key function for mobile phones, which opens and unlocks the vehicle at ease with a single wave, even if one’s phone has no power or no network connection.

A remote-control function is also integrated into the mobile phone app, allowing phones to be a real-time remote control for the vehicle. In short ranges, users can move the Song PLUS in narrow spaces, making parking easier and more convenient.

The 360° panoramic imaging system solves the common problem of blind spots for SUV's and together with a holographic imaging system, it also provides insight into the underbody of the car, making intelligent safety care more comprehensive.

That is a lot of power from a 1.5 gasoline engine.