Airbus has revealed three concepts for the world’s first zero-emission commercial aircraft which could enter service by 2035. All of these concepts rely on hydrogen as a primary power source—an option which Airbus believes holds exceptional promise as a clean aviation fuel and is likely to be a solution for aerospace and many other industries to meet their climate-neutral targets.

To achieve that 2035 deadline with commercial product, Airbus would have to select the specific technologies by 2025, according to Grazia Vittadini, Chief Technology Officer.

This is a historic moment for the commercial aviation sector as a whole and we intend to play a leading role in the most important transition this industry has ever seen. The concepts we unveil today offer the world a glimpse of our ambition to drive a bold vision for the future of zero-emission flight. I strongly believe that the use of hydrogen—both in synthetic fuels and as a primary power source for commercial aircraft—has the potential to significantly reduce aviation’s climate impact. 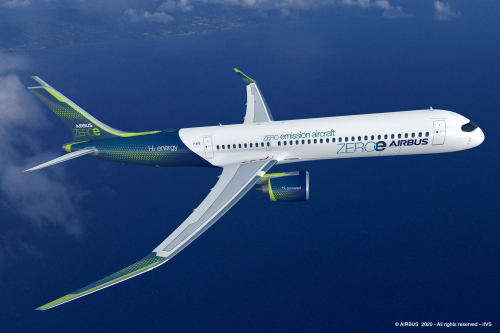 A turbofan design (120-200 passengers) with a range of 2,000+ nautical miles, capable of operating transcontinentally and powered by two hybrid hydrogen turbofan engines. The liquid hydrogen will be stored and distributed via tanks located behind the rear pressure bulkhead. 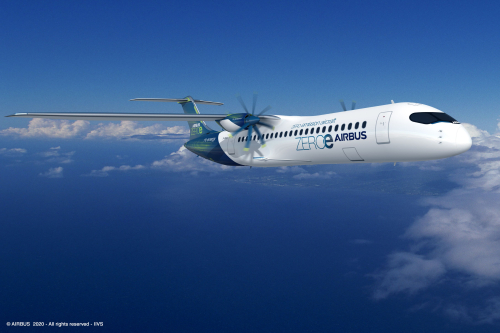 A turboprop design (up to 100 passengers) using two hybrid hydrogen turboprop engines instead of turbofans. It would be capable of traveling more than 1,000 nautical miles, making it a perfect option for short-haul trips. 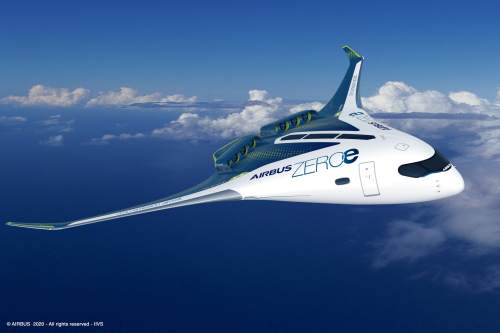 A “blended-wing body” design (up to 200 passengers) concept in which the wings merge with the main body of the aircraft with a range similar to that of the turbofan concept. In the blended-wing body configuration, two hybrid hydrogen turbofan engines provide thrust. The exceptionally wide fuselage opens up multiple options for hydrogen storage and distribution, and for cabin layout.

These concepts will help us explore and mature the design and layout of the world’s first climate-neutral, zero-emission commercial aircraft, which we aim to put into service by 2035. The transition to hydrogen, as the primary power source for these concept planes, will require decisive action from the entire aviation ecosystem. Together with the support from government and industrial partners we can rise up to this challenge to scale-up renewable energy and hydrogen for the sustainable future of the aviation industry.

In order to tackle these challenges, airports will require significant hydrogen transport and refueling infrastructure to meet the needs of day-to-day operations. Support from governments will be key to meet these ambitious objectives with increased funding for research & technology, digitalisation, and mechanisms that encourage the use of sustainable fuels and the renewal of aircraft fleets to allow airlines to retire older, less environmentally friendly aircraft earlier.

To evaluate and validate these new concept aircraft and assess whether they could be matured into viable future products, Airbus will be focusing its efforts on a number of technological pathways.

Airbus sees three primary uses for hydrogen in aircraft: combustion through a modified gas turbine; conversion into electrical energy via a fuel cell; and conversion to synthetic kerosene.

For us it is particularly important to combine the first two of these three elements, meaning having direct combustion of hydrogen through modified gas turbines with an embedded electric motor powered by fuel cells. To accelerate on this path, we already have in the pipeline a zero-emission demonstrator which will be fundamental especially to de-risk concepts such as refueling of such an aircraft and a safe storage and distribution of hydrogen onboard an aircraft. We aim to get the first results by 2021 and that’s an extremely short time indeed to gain insights and the risk safe storage of hydrogen on board an aircraft.

Now just think. Hydrogen has the same energy levels of kerosene so granting the same type of range, of performance for an aircraft with one-third of the weight. Now, the catch is in the volume here as at isoenergetic conditions the volume of hydrogen is four times as much as the one of kerosene so you can understand here how it will be fundamental to get this point right: tank design and integration onto an aircraft.

One of the most typical solutions is to embed this tank in the fuselage and this brings us then to longer stretch fuselage to wider diameters with an impact on aerodynamic performance—more drag—so it’s really key to get the balance right.

I'm not sure that hydrogen is the answer. OK, so you generate no CO2, but you still generate water vapour and (I assume NOx).
+ the tanks are bulky and can't fit in the wings and you need a LH2 global distribution network.
Despite what Elon is likely to say today, I don't see battery aircraft with range > 500 miles for a good while.
No easy answer here, maybe use biofuels or synthetic fuels in turbofans as you do now.
Maybe just use carbon fibre construction and slightly slower cruising speed (to reduce power requirements), stick with hydrocarbons, and do offsets by electrifying ground transport.

Look at the quote of Airbus Chief Technology Officer, Grazia Vittadini:
Now, the catch is in the volume here as at isoenergetic conditions the volume of hydrogen is four times as much as the one of kerosene so you can understand here how it will be fundamental to get this point right: tank design and integration onto an aircraft.
So more complex aircraft designs, e.g. BWB or stretch aircraft, may help and then there is the cost of the fuel. The price of H2 is not coming down just ask Trevor Milton.
Batteries, of course cannot help. Lithium Ion even at 400 Wh/kg would only allow 500 mile range at best. Possibly Metal Air (like the Korean UNIST Aluminum-Air Fuel Cell, which has 2500 Wh/kg), but that would require an entirely new infrastructure.
Renewable Jet Fuel is the only answer short term. However, thanks to Covid-19 no one is flying anyway.

Ask Trevor Milton...ha ha ha. There is a lot of research making headway into green hydrogen at much lower prices. You will also notice that they talk about a HYBRID hydrogen turbofan. Stats put short haul at 54% of the total market globally, and by the time that 54% is covered by hydrogen (or battery) there will be much more advanced tech to expand into medium range and beyond. https://www.researchgate.net/figure/Flight-length-and-duration-for-short-haul-and-long-haul-flights_tbl7_267927654

This is not about "Green Hydrogen", which may have many practical applications, e.g. ammonia or steel production.
Airbus proposes to use liquid hydrogen which has been done before.
The liquid hydrogen will be stored and distributed via tanks located behind the rear pressure bulkhead.
Exactly the way the Russian TU-155 did in 1988, nothing new, still impractical.
Liquid hydrogen has even fallen out of favor in rocket propulsion, again because of cost, both SpaceX and Blue Origin are using liquid methane instead (even the Russians switched to LNG in the TU-155).
Rolls Royce and Reaction Engines are looking at Ammonia which is more promising, though NOx monitoring and proper handling is required. Of course it could be made from "Green Hydrogen".

Hydrogen is a good answer to aircraft pollution if they can make it work and the answer the oil companies favor to keep them in business.
Hydrogen from reforming natural gas fits right into their model for using fossil fuel in the future, instead of jet fuel.
From an environmental POV, it would also be better than any fossil fuel burned directly in jet engines.

I believe that hydrogen is a really bad transportation fuel. It has a number of bad problems including that it leaks thru everything, cases embrittlement of many materials, has high flammability limits and the worst problem is the volumetric low energy density. Liquid hydrogen will need to be cooled to just 20 deg C above absolute zero, using even more energy. If you do make hydrogen, use it to replace coke for the reduction of iron or to make ammonia.

For long haul aircraft, It is probably much better to make other synthetic fuels.

Also for short hauls, batteries can be made to work. Look at the Israeli Eviation Alice. https://en.wikipedia.org/wiki/Eviation_Alice It has a crew of 2 with 9 passengers, a cruise speed of 444 km/h (276 mph, 240 kn) and a range: 1,000 km (620 mi, 540 nmi) with a 45min IFR reserve. This can scaled up to carry 50 or more passengers. The real kicker for the Eviation Alice is the operation cost which they project to be 1/3 to 1/5 that of comparable aircraft. It is better to start with what is possible just like it is better to spend money now on shorter haul battery electric trucks than to try to build more costly long haul fuel cell trucks. You will get more benefits for the money spent.

It would seem using liquid methane would be practical and worthwhile (less CO2) in the short term.
Bio-methane could be zero CO2 longer term.

Electric driven planes use most energy during the lift-off phase. Instead of employing a steam driven catapult like on an aircraft carrier, why not employ a linear e-motor to deliver the major boost for lift-off and reduce the load on the batteries to enable more range?