With the support of the State of Georgia, Jackson County and City of Commerce, SK Innovation plans to hire more than 1,000 skilled workers by the end of 2021 as it prepares for initial production at the first of two electric vehicle battery plants being built in Commerce, about 70 miles northeast of Atlanta. 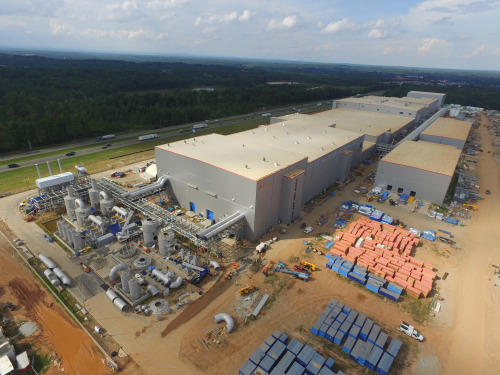 An aerial shot from earlier this year of the SK Battery America site in Commerce, Ga., shows construction progress at the facilities. SK Innovation is building two plants at the Georgia site to make batteries for electric vehicles.

SK Innovation recently reached a hiring milestone with the on-boarding of its first 60 employees at the Commerce site. These employees include production supervisors, production/process/electrical engineers and quality/logistics specialists who will set up, work and serve as the trainers for the EV battery production workforce at the two SK Battery America plants under construction at the site.

SK Innovation also recently achieved key construction milestones at the Georgia site with the completion of the exterior of its first manufacturing plant and ground-breaking on the second plant. Together, the two SK Battery America plants will have capacity to make enough battery cells each year to power the equivalent of more than 300,000 electric vehicles.

SK Innovation, South Korea’s largest energy company, is building two EV battery plants at the Georgia site as part of a $2.6-billion investment in its US battery business that will directly create more than 2,600 permanent jobs in the Jackson County area by 2024. The first SK Battery America plant is scheduled to begin initial operations in 2021 with mass production in 2022. A second plant at the same site is expected to begin mass production in 2023. As the market for electric vehicles continues to grow, SK Innovation is committed to making Georgia a world leader in EV battery manufacturing.

SK Innovation is an affiliate company of Seoul-based SK Group, South Korea’s third-largest conglomerate. SK Group companies have made significant investments in the U.S. in the areas of sustainable energy, biopharmaceuticals, advanced materials and semiconductors, reaching $5 billion in investments in the US over the past three years.

But yet no lobs list through the department of labor? Makes perfect since to those looking.