Volvo Group’s subsidiary Mack Trucks has turned over the keys to its Mack LR Electric demonstration model (earlier post) to New York City Department of Sanitation (DSNY) officials, who will put it through rigorous, real-world trials. 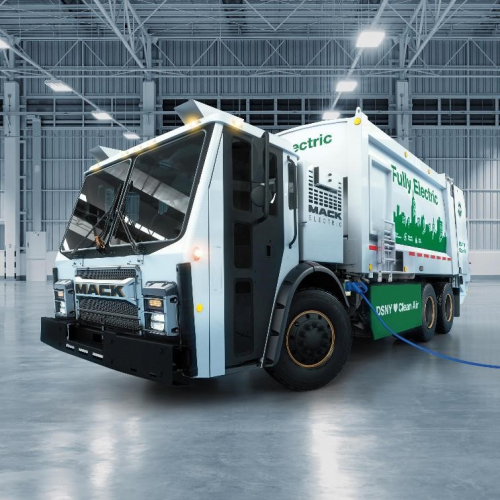 DSNY is the world’s largest municipal sanitation department, with roughly 12,000 tons of refuse and recyclables collected each day by more than 6,000 vehicles. Their collection fleet consists predominantly of Mack vehicles.

DSNY will base the Mack LR Electric demonstration model at its Brooklyn North 1 garage and conduct an in-service trial on local collection routes, evaluating operating range, payload capacity, regenerative braking and overall functionality of the electric refuse vehicle in their operations.

Mack announced earlier this month its plans to commercialize the LR Electric model in 2021, enabling customers to collect refuse in a more environmentally friendly way.

All accessories on the Mack LR Electric model, including the hydraulic system for the Heil Durapack 5000 refuse body, are electrically driven through 12V, 24V and 600V circuits.

Mack unveiled the DSNY LR Electric demonstrator in May 2019 and demonstrated the vehicle to DSNY officials in January 2020 at the Mack Customer Center in Allentown, Pennsylvania.

I have just seen the design of the Mack LR Electric model and honestly, I am impressed. This is the next generation truck to be used for sanitation purposes by the DSNY. Hopefully, it will meet all the standard criteria set by the DSNY as well as meet the expectations of authorities. I am writing about Eco-friendly commutes but stuck in between research when one of my friends recommends me to visit https://edubirdie.net/blog/edubirdie-review website and read edubirdie review about professionals who can do this job. I am really impressed with this idea and now successfully completed it.