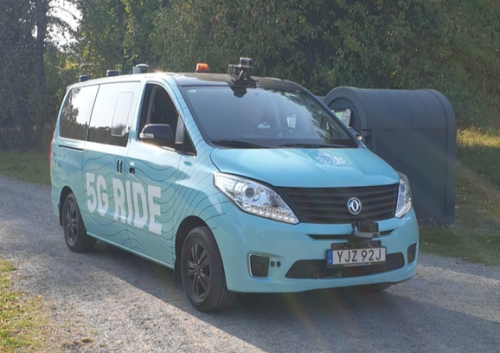 This trial aims to explore the safe introduction of self-driving autonomous electric vehicles in complex urban areas with a view to optimizing route planning and traffic.

The trial will be conducted in Royal Djurgården, one of the country’s most popular tourist destinations, from 24 September to 8 October 2020. The autonomous minibus, which will drive along a 1.6 km route, will serve the National Museum of Science and Technology, the Maritime Museum, the Nordic Museum and Vasa Museum.

The pilot project at Djurgården explores how a system with 5G-connected vehicles, which are monitored by a control tower remotely, can facilitate the safe introduction of self-driving electric buses in more complex and demanding urban areas.

Benefits of such a system include improved route planning and traffic flows, reduced operational costs and pollution and a more reliable, accessible form of public transport for passengers.

The unique technical features of the 5G network, including extremely high data speeds combined with low latency, mean that the connected buses can respond in real time to commands from the centralised control tower. This is a prerequisite for the safe remote control of vehicles and an important step in moving the driver from the bus into the control tower.

Keolis and Ericsson, which provides the technology for the connected control tower, initiated the project following demonstrations of remote control 5G vehicles in 2019 at the UITP exhibition in Stockholm and at the RNTP exhibition in Nantes.

Telia is providing 5G connectivity in collaboration with Ericsson. Intel is delivering processing power to both the IT system in the vehicles and the control tower, as well as the mobile network. The vehicle, which is equipped with self-driving technology, is provided by the Swedish technology firm T-engineering. It features seven seats and will drive at a maximum speed of 18km/h.

Commercial services run from Monday to Friday, between 8 am and 10 am and 2 pm and 4 pm, and feature a safety driver present in the vehicle at all times.

Keolis Sverige has been present in Sweden since 2003 and today operates 1,650 fossil-free buses which cover 84 million km every year in five Swedish regions. A pioneer in autonomous vehicles, Keolis Sverige partnered with Volvo in developing and demonstrating a 12-meter electric which was parked, washed and recharged autonomously at the Keolis depot in Gothenburg in November 2019.