The California Center for Jobs & The Economy has released an updated report (earlier post) on the progress of ZEV sales in the state during the first half of 2020, drawing on sales data from the California New Car Dealers Association (CNCDA). For a baseline, the report uses the goal of 5 million zero-emission vehicles (ZEVs) on California roads by 2030 set by Executive Order B-48-18, which expanded on the prior Executive Order B-16-2012, which set a goal of 1.5 million by 2025.

Overall, total light vehicle sales in California in the first half of 2020 were 786,219 units, down 26.9% from sales in the same period in 2019 primarily as the result of weakened sales in the second quarter. Sales nationally were down 23.5%. 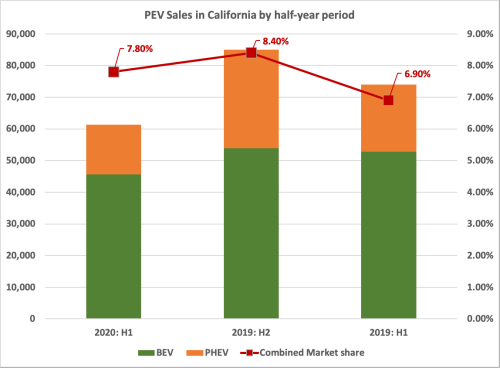 The Center commented this outcome reflects the current pandemic crisis economic situation, with the higher wage workers that still comprise the primary market for electric vehicles largely retaining their jobs through telecommuting.

However, overall market share—as well as regulatory claims for progress on the ZEV goals—still largely depend on sales of the combustion vehicle components, both Plug-in Hybrids (PHEVs) and standard hybrids (HEVs).

BEV sales still rely mostly on Tesla; Tesla sales in the first half were 89% of all California sales in this segment. Evolution of the market has yet to demonstrate sustained participation by a broader range of producers offering models that appeal to a larger share of consumers beyond the higher income segment targeted to date by Tesla, the Center noted.

In spite of the uptick in market share, BEVs remain a small component of the overall market. Using a simple exponential regression, at the current rate of market share growth, it would take nearly 40 years before BEVs reach 100% of vehicle sales, according to Center calculations. Such a calculation puts aside California Governor Newsom’s recent executive order mandating 100% new LDV ZEV sales in the state by 2035. (Earlier post.)

While electric vehicle producers are beginning to introduce light truck options, a greater shift to alternative fuel vehicles will require additional development of these models in order to achieve the state’s goals rather than the cars that comprise virtually all of the electric offerings to date, the Center noted.

Cumulative PEV Sales at 15.3% of 2030 Goal—BEVs at 8.9%. As part of the AB 32 climate change program, Executive Order B-48-18 administratively created a goal of 5 million zero-emission vehicles (ZEVs) on California roads by 2030. Rather than only true ZEVs, the numbers in the Executive Order and previous interpretations by the agencies indicate the goal is to be achieved by both BEVs that run only on electricity and combustion PHEVs that run on both electricity and gasoline.

Consequently, only a portion of the vehicles being counted to meet the zero-emission goal—roughly half based on current sales volumes—will in fact produce zero emissions when driven. Additionally, FCEVs (fuel cell electric vehicles) also would count towards the ZEV total, but CNCDA data show total market share for these vehicles to date at around 0.1%.

Using this more flexible interpretation that includes both true ZEVs and combustion PHEVs, total PEV sales since 2009 account for 15.3% of the 2030 goal. True ZEV sales, however, account for only 8.9%.

In addition to the distortion that comes from including combustion vehicles in the ZEV total, the Executive Orders also refer to ZEVs on California roads while the agency accountings rely on sales as the measure of progress. Using prior Energy Commission reviews to account for ZEVs no longer on the roads as a result of accidents, moves out of state, and other factors that over time remove vehicles from the active fleet, the actual progress rate consistent with the Executive Order language of “vehicles on California’s roads” would be 14.1%, while progress counting only true ZEVs would be 8.2%, according to Center calculations.

As discussed in the 2018:Q1 report, carpool lane sticker data, however, suggests a much higher turnover of PEVs “off California’s roads” than in prior estimates. This factor would put the progress to date even lower.

On the other hand, perhaps if Hyundai or Toyota or Ford got their hands on $60 batteries, they might do better.

We need to provide EV incentives, it is not enough to mandate.