Scientists at Oak Ridge National Laboratory have created a composite that increases the electrical current capacity of copper wires, providing a new material that can be scaled for use in ultra-efficient, power-dense electric vehicle traction motors. 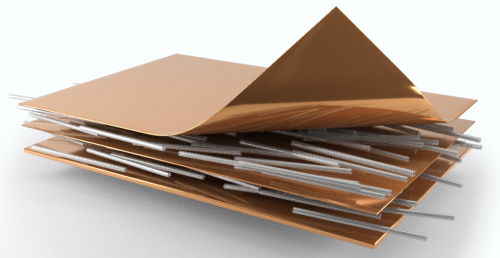 The research is aimed at reducing barriers to wider electric vehicle adoption, including cutting the cost of ownership and improving the performance and life of components such as electric motors and power electronics. The material can be deployed in any component that uses copper, including more efficient bus bars and smaller connectors for electric vehicle traction inverters, as well as for applications such as wireless and wired charging systems. 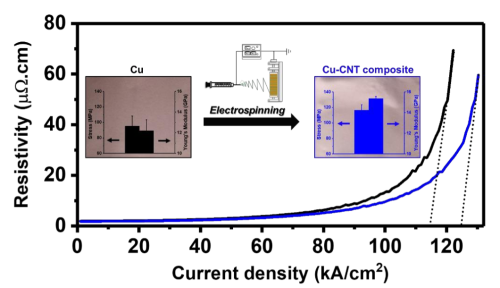 The power losses associated with the electrical resistance of copper (Cu) have generated considerable interest in the development of advanced conductors that incorporate carbon nanotubes (CNTs) into the Cu matrix—ultraconductive Cu (UCC) composites—to increase energy efficiency in various industrial and residential applications, ranging from electric power transmission and rotating machinery to electronic devices. To meet this demand, we describe an electrospinning-based polymer nanofiber templating strategy for the fabrication of UCC composites with electrical and mechanical performance exceeding that of Cu.

Importantly, after the heat treatment, Raman analysis of the CNT network displayed an increased metallic character that supports the enhanced electrical properties of the UCC composites. Thus, we believe that these performance characteristics together with the commercial viability of the present approach could open new possibilities in designing advanced conductors for a broad range of electrical systems and industrial applications.

Incorporating carbon nanotubes (CNTs) into a copper matrix to improve conductivity and mechanical performance is not a new idea. CNTs are an excellent choice due to their lighter weight, extraordinary strength and conductive properties. However, past attempts at composites by other researchers have resulted in very short material lengths, only micrometers or millimeters, along with limited scalability, or in longer lengths that performed poorly.

The ORNL team decided to experiment with depositing single-wall CNTs using electrospinning, a commercially viable method that creates fibers as a jet of liquid speeds through an electric field. The technique provides control over the structure and orientation of deposited materials, explained Kai Li, a postdoctoral researcher in ORNL’s Chemical Sciences Division. In this case, the process allowed scientists to successfully orient the CNTs in one general direction to facilitate enhanced flow of electricity.

The team then used magnetron sputtering, a vacuum coating technique, to add thin layers of copper film on top of the CNT-coated copper tapes. The coated samples were then annealed in a vacuum furnace to produce a highly conductive Cu-CNT network by forming a dense, uniform copper layer and to allow diffusion of copper into the CNT matrix.

Using this method, ORNL scientists created a copper-carbon nanotube composite 10 centimeters long and 4 centimeters wide, with exceptional properties. The microstructural properties of the material were analyzed using instruments at the Center for Nanophase Materials Sciences at ORNL, a US Department of Energy Office of Science user facility.

Researchers found the composite reached 14% greater current capacity, with up to 20% improved mechanical properties compared with pure copper, as detailed in a paper in ACS Applied Nano Materials.

By embedding all the great properties of carbon nanotubes into a copper matrix, we are aiming for better mechanical strength, lighter weight and higher current capacity. Then you get a better conductor with less power loss, which in turn increases the efficiency and performance of the device. Improved performance, for instance, means we can reduce volume and increase the power density in advanced motor systems.

The work builds on a rich history of superconductivity research at ORNL, which has produced superior materials to conduct electricity with low resistance. The lab’s superconductive wire technology was licensed to several industry suppliers, enabling such uses as high-capacity electric transmission with minimal power losses.

While the new composite breakthrough has direct implications for electric motors, it also could improve electrification in applications where efficiency, mass and size are a key metric, Aytug said. The improved performance characteristics, accomplished with commercially viable techniques, means new possibilities for designing advanced conductors for a broad range of electrical systems and industrial applications, he said.

The ORNL team also is exploring the use of double-wall CNTs and other deposition techniques such as ultrasonic spray coating coupled with a roll-to-roll system to produce samples of some 1 meter in length.

Electric motors are basically a combination of metals: steel laminations and copper windings. To meet DOE’s Vehicle Technologies Office’s 2025 electric vehicle targets and goals, we need to increase power density of the electric drive and reduce the volume of motors by 8 times, and that means improving material properties.

—Burak Ozpineci, manager of the ORNL Electric Drive Technologies Program and leader of the Power Electronics and Electric Machinery group

The work was funded by DOE’s Office of Energy Efficiency and Renewable Energy, Vehicle Technologies Office.