The low-cost materials—made of lithium, boron and sulfur—could improve the safety and performance of electric cars, laptops and other battery-powered devices, according to the scientists. Their findings are published in a study in the journal ACS Applied Materials & Interfaces.

We report exceptional density functional theory (DFT)-based room-temperature single-crystal ionic conductivity values for two phases within the crystalline lithium−boron−sulfur (Li−B−S) system: 62 (+9, −2) mS cm−1 in Li5B7S13 and 80 (−56, −41) mS cm−1 in Li9B19S33. We report significant ionic conductivity values for two additional phases: between 0.0056 and 0.16 mS/cm−1 in Li2B2S5 and between 0.0031 and 9.7 mS cm−1 in Li3BS3 depending on the room-temperature extrapolation scheme used.

To our knowledge, our prediction gives Li9B19S33 and Li5B7S13 the second and third highest reported DFT-computed single-crystal ionic conductivities of any crystalline material.

We compute the thermodynamic electrochemical stability window widths of these materials to be 0.50 V for Li5B7S13, 0.16 V for Li2B2S5, 0.45 V for Li3BS3, and 0.60 V for Li9B19S33. Individually, these materials exhibit similar or better ionic conductivity and electrochemical stability than the best-known sulfide-based solid-state Li-ion electrolyte materials, including Li10GeP2S12 (LGPS).

However, we predict that electrolyte materials synthesized from a range of compositions in the Li−B−S system may exhibit even wider thermodynamic electrochemical stability windows of 0.63 V and possibly as high as 3 V or greater. The Li−B−S system also has a low elemental cost of approximately 0.05 USD/m2 per 10 μm thickness, which is significantly lower than that of germanium-containing LGPS, and a comparable mass density below 2 g/cm3. These fast-conducting phases were initially brought to our attention by a machine learning-based approach to screen over 12,000 solid electrolyte candidates, and the evidence provided here represents an inspiring success for this model. 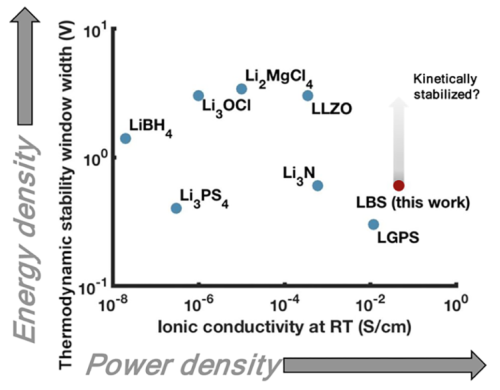 Most lithium-ion batteries today use a liquid electrolyte that can combust if the battery is punctured or short-circuited. Solid electrolytes, on the other hand, rarely catch fire and are potentially more efficient. Most solid electrolytes in use today are too unstable, inefficient and expensive to be commercially viable, the authors said.

Conventional solid electrolytes can’t conduct as much ionic current as liquid electrolytes, said study lead author Austin Sendek, a visiting scholar in Stanford's Department of Materials Science & Engineering. “The few that can usually degrade once they come in contact with the battery electrodes.”

To find reliable solid electrolytes, Sendek and his colleagues in 2016 trained a computer algorithm to screen more than 12,000 lithium-containing compounds in a materials database. Within minutes the algorithm identified approximately 20 promising materials, including four little-known compounds made of lithium, boron and sulfur.

In the current study, the researchers took a closer look at the four compounds using a technique called density functional theory, which simulates how the materials would behave at the atomic level.

Lithium-boron-sulfur electrolytes could be about twice as stable as the leading solid electrolytes, the current study shows. Stability can impact the amount of energy per unit weight a battery can store. In electric vehicles, that can mean a longer driving range.

When a typical solid electrolyte breaks down, it chemically transforms from a good conductor into a bad conductor, causing the battery to stop working. The study predicted that when mixed together, the four lithium-boron-sulfur compounds would continue functioning even as they decompose.

The study also predicted that certain phases of the lithium-boron-sulfur materials could be three times better at conducting lithium ions than state-of-the-art solid electrolytes made with costly germanium.

Some of the best solid electrolytes available today are made with rare elements like germanium, a kilogram of which costs about $500. Lithium, boron and sulfur are abundant chemicals with a price tag of $26 per kilogram.

Finding a viable solid electrolyte could also lead to the development of lithium metal batteries—energy-dense, lightweight batteries that are ideal candidates for electric cars.

Most lithium-ion batteries have a negatively charged electrode made of graphite. In lithium metal batteries, graphite is replaced with metallic lithium, which can store significantly more charge per kilogram.

Lithium metal is really the holy grail of battery research," Sendek said. "But lithium metal electrodes have a tendency to internally short during operation, which liquid electrolytes do nothing to prevent. Solid electrolytes seem to be our best chance of overcoming that problem, and lithium-boron-sulfur electrolytes are promising candidates.

The Stanford study provides a theoretical roadmap for future research. The next step is to synthesize all four lithium-boron-sulfur materials and test them in a battery.

From what my experimentalist friends tell me, making these materials in the lab may be quite difficult. Our job as theorists is to point the experimentalists to promising materials and let them see how the materials perform in real devices.

Other Stanford co-authors of the study are Yi Cui, associate professor of materials science & engineering and of photon science at SLAC National Accelerator Laboratory; and PhD students Evan Antoniuk in the School of Humanities & Sciences and Brandi Ransom in the School of Engineering. Other co-authors are Ekin Cubuk at Google Brain, and Brian Francisco and Josh Buettner-Garret at Solid Power, Inc.

Funding for the study was provided by the Stanford TomKat Center for Sustainable Energy and the Toyota Research Institute Accelerated Materials Design & Discovery program.

The low-cost materials—made of lithium, boron and sulfur—could improve the safety and performance of electric cars, laptops and other battery-powered devices,
The real value of a solid electrolyte is the extra safety over a liquid electrolyte which typically contain flammable components. Electrolytes are a key factor in battery fires, more so than battery geometry.
In addition to the low cost and general availability of the components, this electrolyte also has good ionic conductivities.

can’t conduct as much ionic current...
That is one of the factors, the other is less flammable and longer life.

Looks like high power, not so high energy to me.

@ gryf
The three most important aspects of a cell are;
1) Electrode materials (anode and cathode)
2) Electrolyte
3) Cell geometry (structure / design / architecture)
These aspects determine energy density per mass (kg) and volume (ltr.). To achieve a max. energy density, those major aspects must be optimized.

You left out separators or their removal, e.g.24M which reduces inactive material unless they promote ionic conductivity or strengthen the anode or cathode.
There is also Conductor design: reduced use of copper or aluminum using polymers ( check out Soteria at http://www.soteriabig.com/uploads/5/7/8/8/57886015/soteria_informational_overview_180918.pdf or APB Japan (all polymer battery). Tesla is also enhancing Conductor design in the Tabless 4680 battery.
So we have covered Battery Chemistry, Battery Materials, and Battery Shape. There are other factors such as voltage, cycle life, temperature range, and manufacturing steps. Of course, that only covers the battery cell and not the battery or converter.

Use an ion conductive polymer and you'll have your electrolyte and separator all-in-one. But that already constitutes cell chemistry which I deliberately wanted to avoid because in my opinion this is not a part of the three basic major aspects determining the overall cell structure. Beyond that, I personally favor 3D structures that bear far more potential than the the commonly employed 2D cell designs.