A current research project is working to establish the technical basis for standardization of methanol fuels in Europe. The project involves a consortium of universities, research institutes, industrial companies and small and medium-sized enterprises as partners.

The partners in the “Methanol Standard” project aim to pave way for the certification and market launch of methanol fuels. In the short term, the researchers assess the potential of methanol fuels to make a significant contribution in reducing CO2 emissions, in road traffic, as high. To achieve this goal, a number of technical requirements must be clarified. 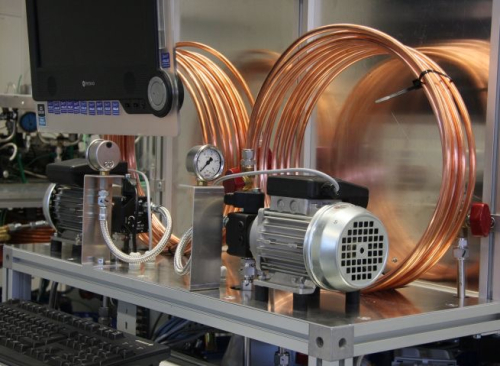 Hardware-in-the-loop test rig for the qualification of fuels. Photo: TEC4FUELS

While methanol production from fossil raw materials is common practice in the chemical industry, it is still in the development stage on the basis of renewable energy sources, although it already has a high technology readiness level. In power-to-liquid processes, greenhouse gas-reduced methanol can be produced by the synthesis of CO2 and hydrogen. The CO2 required can, for example, come from power plant processes or from the air, and the hydrogen can be obtained from the electrolysis of water with regenerative electricity: solar power plants.

The research project focuses on the development of new and the use of existing production processes, as well as on safety-relevant aspects of methanol use.

A further important aspect is the optimization of gasoline-engine combustion concepts for the use of methanol. On one hand, the partners are investigating the suitability of 15% methanol as a drop-in fuel to conventional gasoline in future series-produced gasoline engines and, on the other hand, the use of 100 % methanol in a technically adapted prototype engine to be used in a vehicle.

Among other things, the focus is on questions of cold-start behavior, knock resistance, efficiency, exhaust emissions, and material compatibility.

Before alternative fuels can be launched in the market, their storage stability or aging behavior must be tested, as well as their compatibility with fuel tank materials and the fuel supply system. This applies both to the effect of fuel on metals and plastics used in vehicle construction.

While the corrosive effect of fuels plays a particularly important role in the case of metals, the swelling effect of plastics is also of particular importance. OWI Science for Fuels gGmbH uses targeted ageing methods to investigate the fuel ageing and material compatibility of methanol and methanol-gasoline blends as well as the effect of potentially required fuel additives to prevent possible corrosion and swelling effects.

The research institute tests and evaluates the aged fuel and material samples for potential changes in physio-chemical analyses. TEC4FUELS GmbH supplements these investigations with hardware-in-the-loop tests. In the test setup, methanol and various blends as well as additive mixtures flow through fuel-carrying components under forced and application-oriented conditions, so that ageing effects in real operation can be anticipated and evaluated in a relatively short time.

For the introduction of methanol as a fuel in road traffic, the previous standardization work is an essential intermediate step, which should ensure the safe operation of the vehicle. TEC4FUELS, with the support of the consortium in this research project, is compiling the results of the investigations to be carried out in a technical report and preparing a draft standard for the responsible standards working group (Normarbeitskreis, NAK).

This research project is funded by the German Federal Ministry of Economics and Energy, based on a resolution of the German Bundestag.

Good stuff. Methanol could be a useful synthetic fuel using CO2 from whatever source.
Much easier to store and transport than H2 + you can use an ICE to use it.
A methanol hybrid could be a very low co2 car with no range problems.
(But you'd have to distribute the methanol).

Fleets are good for alternatives, they have their own fueling.

Renewable Methanol and DME can be made from Biomass Syngas at competitive prices. It is already a proven alternative fuel for diesel engines for both Marine and over the road applications. Also, Methanol already has a global distribution system.