Rolls-Royce has completed testing of the technology that will power the world’s fastest all-electric plane. All the technology has been tested on a full-scale replica of the plane’s core—called an ‘ionBird’—including a 500hp electric powertrain powerful enough to set world speed records and a battery with enough energy to supply 250 homes.

The plane is part of a Rolls-Royce initiative called ACCEL, short for “Accelerating the Electrification of Flight”. The ACCEL project team includes key partners YASA, the electric motor and controller manufacturer, and aviation start-up Electroflight.

The team has been developing the technology while adhering to the UK Government’s social distancing and other health guidelines; the systems will soon be integrated into Rolls-Royce’s ‘Spirit of Innovation’ plane. There is a long history of iron-birds in aviation for testing propulsion systems ahead of flight; in this case Rolls-Royce named the test airframe “ionBird”, after the zero-emission energy source propelling the aircraft. 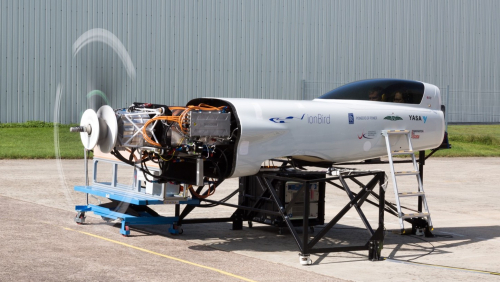 The dedicated team have tested each and every component of the system including running the propeller up to full speed (approximately 2,400 rpm) using the most power-dense battery pack ever assembled for aircraft propulsion. 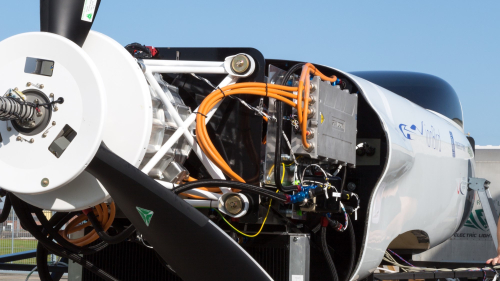 When at full power during the flight-testing phase, it will propel the aircraft to more than 300 mph setting a new world speed record for electric flight. More than 6,000 cells are packaged in the battery for maximum safety, minimum weight and full thermal protection.

Since January, engineering and test pilots have spent many hours optimizing the system and developing operating procedures for electric flight. GBs of data—generated every hour of operation—are analyzed to improve performance wherever possible.

Rolls-Royce is committed to playing a leading role in reaching net zero carbon by 2050. The completion of ground-testing for the ACCEL project is a great achievement for the team and is another important step towards a world record attempt. This project is also helping to develop Rolls-Royce’s capabilities and ensure that we remain a leader in delivering the electrification of flight, an important part of our sustainability strategy.

Bremont will be the official timing partner for the all-electric speed record attempt. The British luxury watch maker has also helped develop the design of the plane’s cockpit which will feature a stopwatch, while the company has machined canopy release parts at its Henley-on-Thames manufacturing facility.

The first flight is planned for later this year; the aim is to beat the current all-electric flight world record early next year. Half of the project’s funding is provided by the Aerospace Technology Institute (ATI), in partnership with the Department for Business, Energy & Industrial Strategy and Innovate UK.

The ACCEL project is the first Rolls-Royce project to use offsetting to make the whole program carbon neutral.

Reminds me of my dad's books about the 1929 Schneider trophy S.6b aircraft and similar.

(Not in looks, just in outlook)

The Supermarine_S.6B led to the development of the Supermarine Spitfire (also designed by R J Mitchell) and the Rolls Royce Merlin engine. Two of the most important and iconic aviation developments in history.
Maybe this also will lead to great developments.

@gryf,
No, this will not lead to any great development. This does not prove anything except just for bragging right. Lucid Motor has already achieve very pwerful e-motor Going fast in an airplane requires a lot of energy that battery simply does not have. In an electric car, the power is only needed for a few second short burst to get to speed limit. Still, even cruising at the speed limit at 75 mph drops the range of the Model S from 402 miles down to the low 200 miles, as Car & Driver magazine has tested.
For environmental sustainability, Rolls Royce needs to work on using Green hydrogen for air transportation, working on all angles and ramification of the issue, from the supply chain to airframe optimization to power plants using Green H2.

Power increases with the cube of the speed if aerodynamic drag is the major factor (as it is in fast cars and planes).
So the trick for E aviation is to go a bit (quite a bit) slower than current planes.
The advantage of short range aviation is that you can hop over things like cities and estuaries etc.
They may still learn a bit from the engine design and the other bits - if you can fly at 1/2 the speed, you might get 4 times further (probably not 8 times because you'll need to keep enough lift to make the plane fly!).

In general, I am skeptical about electric aviation for anything over 500 miles as batteries are too heavy and H2 storage is heavy and bulky, and H2 is a difficult fuel to store and transport (and usually comes from methane).

Maybe just use the most efficient aircraft you can and spend the money on offsets (i.e. actually build stuff, not just buy slips of paper on an exchange somewhere).

E land vehicles are easy enough, E ships can use heavy batteries or large H2 tanks, but making this stuff light enough to fly is a problem.

A model using today's state of the art technology might be a jettison rocket motor or jettison jet engine burning H2 to launch the craft to altitude where a fuel cell, with a buffer battery, takes over for ongoing cruising power.
Even in the future I don't believe batteries will ever approach the energy density of carbon fuels; but, I believe motors and batteries will improve greatly to the point that burning carbon fuel is an exception to the norm; for example; when one flies nonstop to Europe..

@lad, I'd say they will keep working on H2 storage for aircraft and get enough in that.
Or else use Methanol or ammonia for a different cycle.

(I wouldn't like to be around if an ammonia plane goes down, though).

Remember, it doesn't have to be electric, it just has t produce no or very little greenhouse gases and be afforable and safe.

Here's a great book on zeppelins if you are interested: "Dr. Eckener's Dream Machine"

From the Rolls Royce web site -
Pursuing cleaner, safer, more sustainable power . . Championing electrification across all our businesses is a central part of our corporate strategy
This is about Electric Aviation in it's many forms, not just BEV. Rolls Royce is looking into many different types of sustainable aviation and propulsion platforms, e.g. Methanol, Ammonia, and Hydrogen. Depending on the performance requirements it could be many different options. Electrification can be applied to helicopters, turboprops, even hybrid turbofans. However, for long range air travel, drop-in sustainable hydrocarbon fuels look like the best option based on volumetric energy density, cost, and infrastructure, but who knows what the future will bring.