Home About Contact RSS GCC Twitter Newsletter
Jervois to acquire SMP nickel & cobalt refinery in Brazil; concentrate from Idaho for refining, cobalt metal back to US
Study finds noble metal clusters can enhance performance of catalysts and save resources

Crop switching and relocation of crop production to different states could prevent up to half of predicted losses in agricultural profits from climate change impacts according to new research conducted by the Grantham Research Institute on Climate Change and the Environment at the London School of Economics and Political Science published in Nature Communications.

The research applied a new approach to barley, corn, cotton, soybeans, rice, and wheat crops to estimate the economic potential of crop reallocation in the United States over the next 50 years. It found that if crop locations are held constant in the future, total agriculture profits for the six crops will drop by 31%. 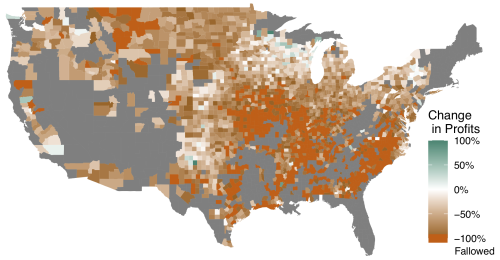 However, if crop lands are reallocated to avoid yield decreases, and to take advantage of yield increases, half of these losses are avoided. In order to avoid these losses, 57% of counties in the United States would be required to plant different crops than they currently do.

Projected extreme temperatures under climate change are predicted to reduce average yields for several of the United States’ major crops. These changes in productivity would drive farmers to change crops and move into new areas. The extent of these regional changes in agricultural productivity and how they influence future cropping decisions is a central question for the risks of climate change for agriculture and food security.

Farmers are particularly exposed to the problems of climate change. Adaptation to climate change, for example by investing in irrigation, agricultural research, and new management practices, can take decades of planning.

We need to better understand the potential for adaptation for farmers and policy-makers to make long-term decisions. We show that adaptation through the movement of crops can reduce climate change losses, but it does not eliminate them.

The research found that the sensitivity of crops to extreme temperatures varies across the United States. Yields for corn and cotton are harmed less by high temperatures in the southern US, reflecting adaptation in seed varieties and farming practices to minimize losses. For wheat and barley, adaptation depends on water availability, with higher sensitivity in dry regions.

When the model was applied to determine the best planting patterns in 2050 and 2070, it found that corn retains its enormous area but becomes less concentrated in the Midwest. Soybeans show a gradual movement north, replacing spring wheat and barley. The wheat lands of the Great Plains see a gradual hollowing-out, while winter wheat moves up from the south along the Mississippi. Cotton, found to be the most resilient crop to rises in temperature, is grown at higher latitudes, becoming the dominant crop in southern California.

At the same time, parts of the southern US become unprofitable for any of the crops studied. These tend to be the hottest counties, and account for 5% of currently planted land by 2070. The research did not predict that crops would shift north in an orderly way, because of regional variation in climate and local sensitivity for each of the crops.

Our results show considerable potential from crop switching to avoid some of the damages from climate change. These opportunities are driven both by differences in how temperatures may change in different regions as well as differences in the sensitivity of crops to higher temperatures. However, the remaining losses imply that crop switching is not a panacea and that new seed varieties and new adaptation practices are needed to support farmers and meet the food demands of the future.

There is a streaming movie named Kiss the Ground that shows
how putting carbon back in the ground can improve soil and crop yields.