Consumer Reports: most popular electric vehicles cost less to own than the best-selling gas-powered vehicles in their class

Owning a plug-in electric vehicle today will save consumers thousands of dollars compared to owning a gas-powered vehicle, according to a new analysis by Consumer Reports comparing electrics to CR’s top-rated vehicles, as well as the best-selling, most efficient, and best-performing gasoline-powered vehicles on the market.

The analysis found lifetime ownership costs for the most popular EVs on the market under $50,000 are typically $6,000 to $10,000 less than the best gas-powered vehicles in their class (defined by vehicle style, size, interior volume, and cargo space). Tesla’s Model 3, the best selling EV on the market, delivered the biggest savings: at least $15,000 compared to both the BMW 330i (best selling) and Audi A4 (top rated). 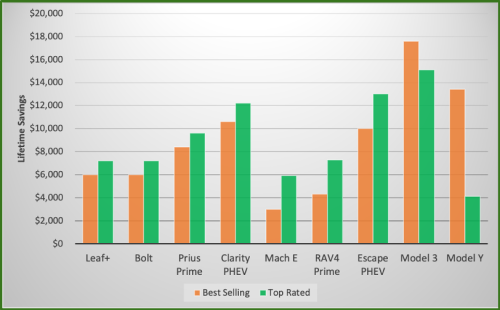 The overall out-of-pocket-costs for many consumers who finance will be lower in their very first year of ownership, despite the fact that the upfront cost of electric vehicles remains higher today than their gas-powered counterparts.

Where the savings come from:

I wish they would define "Lifetime". How long exactly is that?