As part of the FC Komp funding project of the German government, which runs until 2021, Pierburg GmbH, a member of the Rheinmetall Group, is currently involved in the development of a highly integrated high-power fuel cell driveline.

The automotive supplier is contributing an innovative hydrogen recirculation blower, the development of which is being funded by a six-digit euro sum. Partners in this project of the Federal Ministry of Transport and the German National Organization for Hydrogen and Fuel Cell Technology (NOW - Nationale Organisation für Wasserstoff- und Brennstoffzellentechnologie) are the car manufacturer BMW, the University of Siegen and other suppliers. 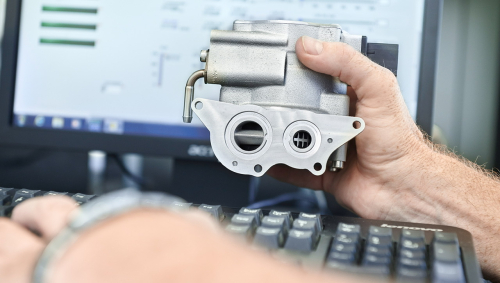 The task of Pierburg’s blower is to feed the hydrogen not consumed during the reaction in the fuel cell back into the stack. The blower thus increases the fuel cell’s efficiency and extends its service life. Moreover, by distributing the hydrogen homogeneously in the cell, it enables improved cold-start response. The blower was developed in both a low- and high-voltage version with up to 800 volts.

The project aims to reduce the currently still high manufacturing costs of these systems by using low-cost, space-saving components and a high level of integration. The fuel cell should thus be able to be used instead of combustion engines in the front of passenger cars without detrimental effects on weight or installation space. In view of road-traffic approval, the entire fuel cell system in the vehicle is also subjected to numerous tests. These include crash tests as well as investigations into the safe functioning of hydrogen tanks.

The background of the project is the fundamental contribution of battery and fuel cell drivelines to the development of sustainable mobility.

We are noticing increasing interest in the market from almost all manufacturers. This applies, on the one hand, to larger passenger cars and SUVs, and increasingly to commercial vehicles, buses and stationary applications.