Study finds stabilizing warming at 1.5 ˚C would result in economic hit through 2100; benefits accrue by 2300

A new study by a team from San Jose State University and Stanford University has found that—even under heightened damage estimates—the additional mitigation costs of limiting global warming to 1.5 °C (relative to 2.0 °C) are higher than the additional avoided damages this century under most parameter combinations considered. An open-access paper on their work appears in the journal PLoS ONE 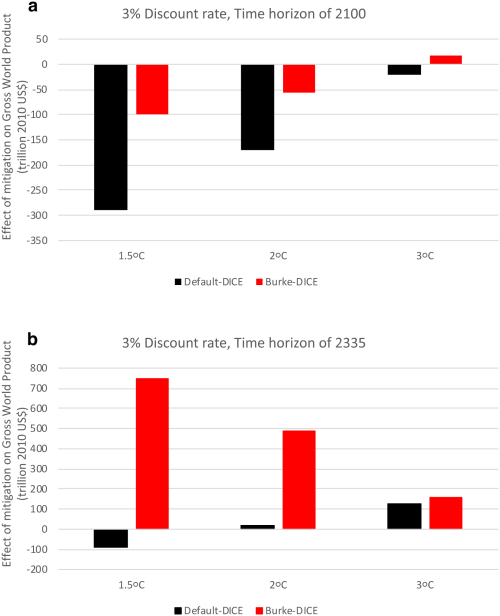 They found that the benefits of more stringent mitigation accumulate over time; the calculations indicate that stabilizing warming at 1.5 °C or 2.0 °C by 2100 would eventually confer net benefits of thousands of trillions of dollars in gross world product by 2300.

The results emphasize the temporal asymmetry between the costs of mitigation and benefits of avoided damages from climate change and thus the long timeframe for which climate change mitigation investment pays off.

Brown and Saunders note that efforts to mitigate global warming are often justified through calculations of the economic damages that may occur absent mitigation. Although the earliest damage estimates were speculative, more recent studies have provided empirical estimates of damages on economic growth that accumulate over time and result in larger damages than those estimated previously.

These damage estimates suggest that limiting global warming this century to 1.5 °C avoids tens of trillions of 2010 US dollars in damage to gross world product relative to limiting global warming to 2.0 °C. However, in order to estimate the net effect on gross world product, mitigation costs associated with decarbonizing the world’s energy systems must be subtracted from the benefits of avoided damages, the authors argue.

In the study, they parameterized heightened damage estimates into a schematic global climate-economy model (DICE) to be weighed against mainstream estimates of mitigation costs in a unified framework.