A small team at Merceds-Benz has created the all-electric EQC 4x4² off-road concept—a drivable technology platform on the basis of an EQC 400 4MATIC (combined power consumption: 21.3-20.2 kWh/100 km). Technical highlights include multi-link portal axles as well as the production of a powerful sound in the interior and exterior. The headlamps turn into “lampspeakers”, because they also function as a loudspeaker at the same time. 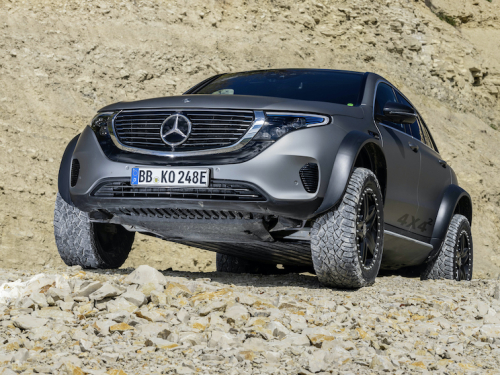 The tremendous ground clearance is made possible by the conversion to portal axles: unlike conventional axles, the wheels are not at the height of the axle centre, but are instead situated much lower down on the axle hubs owing to the portal gears. Or conversely, the entire vehicle moves up. The 4x4² suspension is attached to the same body mounting points as the standard suspension.

For example, using targeted brake interventions, this enables an improved torque curve when starting on loose ground. In combination with the tires in size 285/50 R 20, this results in an impressive sure-footedness in terrain. The striking visual appearance is rounded off by the matt metallic gun-metal grey car film and the black wheel arch flares.

The EQC 4x4² is already the third model of the 4x4² family from Mercedes-Benz. The G 500 4x4² was actually built in series production from September 2015. And in 2017, with the E 400 All-Terrain 4x4² study, Mercedes-Benz showed many an SUV its limitations when off-road.