Linear Labs has raised an additional $6 million in funding to further develop manufacturing capabilities and grow its employee base. The new capital comes shortly after Linear Labs’ $68.9 million partnership with the City of Fort Worth, Texas, was announced, which includes an incentive package involving Linear Labs’ plans to develop an advanced manufacturing facility.

The patented HET motor technology from Linear Labs produces up to twice the torque of competitor motors —or the same torque in half the size—and can also be made using rare-earth or ferrite magnets. The design is based upon a breakthrough magnetic flux tunnel featuring both dual axial flux and dual radial flux rotors tied together around one stator, meaning it is effectively four motors working as one. 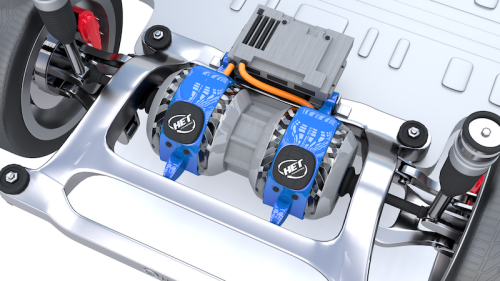 The initial next phase of Linear Labs production will include the 200 series motor, which provides two times the peak torque of its closest competitor, at 108 N·m with bursts up to 140 N·m. The 200 series motors are also 1.7 kg lighter than competitors, with average efficiency over the RPM range of 88% versus the competitions’ 59%, and with Linear Labs’ motors offering peak efficiency of 92%.

The funding will be used to expand manufacturing expertise, supply chain infrastructure and logistics, as well as advanced automation and robotics engineering, in order to meet the current signed customer needs of producing 100,000 units in 2021 with a target of 1,000,000 units the following year. Clients for these motors include global OEMs in automotive, micro-mobility, industrial pump and applications, as well as residential and light commercial HVAC.

Additionally, Linear Labs has expanded their Board of Directors to include Chris MacFarland, Chairman and CEO of Texas-based Masergy, a software-defined cloud platform leader.

I checked the specs on their web and they are a bit underwhelming.

Their power to weight ratio is not that different from many pm motors, but the design seems much more convoluted and difficult to build.

Linear Labs is focused on torque density rather than power density. Volumetric and gravimetric torque density are the key metrics for this company. Power is equal to Torque x RPM. The highest power to weight ratio motors are relegated to the highest speed motors that rely on gearboxes to create torque, of which the weight of the required gearbox is never included in the power to weight ratio claims. It is not uncommon to see EV motors operating at 8,000-14,000RPM (coupled to a heavy gearbox of course) in order to achieve a relevant "power to weight" ratio, albeit excluding the gearbox and liquid cooling system components in that calculation. Maximum direct drive torque with minimal weight and volume are very important for many applications and that is where the Linear Labs HET really shines.

The torque allows them to drive the wheels directly, no gears.

The place to put them is on the inside of the wheel hub bearings,
this gets rid of the CV shafts and retains the standard disc brakes.

I can accept the high torque vs. weight argument, however the article is illustrated with a car drivetrain. I don't think it makes any sense for cars, there you want the best power to weight ratio (and hugh efficiency too).

This motor just does not seem to shine in that area.

Hub motors for cars is another seemingly no-go idea. You want to remove weight from wheels, not adding more.

If you only add 20% to the unsprung weight,
the suspension can deal with that.
Two CV shafts weigh up then fail when the boots tear.