Home About Contact RSS GCC Twitter Newsletter
USTMA report finds that recycling of end-of-life tires dropped from 96% in 2013 to 76% in 2019
Fuel cell industry forms new alliance for rapid deployment of heavy-duty vehicles in Western US: WSHA

The strategy is centred around two main technology routes, as introduced in the first ArcelorMittal Europe climate action report published earlier this year:

Hydrogen. Hydrogen plays a central role in the company’s decarbonization strategy. ArcelorMittal Europe is developing a series of industrial-scale hydrogen projects for use in blast furnace-based steelmaking that will start to deliver substantial CO2 emissions savings even within the next five years, as well as progressing a project to test the ability of hydrogen to reduce iron ore and form DRI on an industrial scale.

Ultimately to reach zero, this hydrogen will need to be green (produced via electrolysis which is powered by renewable electricity). ArcelorMittal is therefore developing new facilities to produce green hydrogen using electrolyzers. Teams at ArcelorMittal Bremen in Germany are working on the first large-scale deployment of this technology which can then be deployed in both the blast furnace and the DRI-EAF route. Previously, this emerging technology has only been tested at small pilot plants in Europe.

Hydrogen and the blast furnace. By installing an electrolyzer, hydrogen can be produced and injected in large volumes into the blast furnace tuyeres. The project will reduce the volumes of coal needed in the iron ore reduction process, thereby cutting CO2 emissions.

This is the first large-scale implementation of what is essentially a hybrid blast furnace/DRI technology. In due course it will enable green hydrogen to be injected into the blast furnace as it becomes available.

ArcelorMittal Europe is also implementing projects in almost all its Flat Products sites to use gases from different sources for blast furnace injection. Injecting hydrogen-rich coke oven gas is an efficient, cost effective method that allows steelmakers to reduce CO2 emissions now. ArcelorMittal Asturias (Spain) has the most advanced coke oven gas project, with injection of grey hydrogen (hydrogen that has been recovered from gases including natural gas and coke oven gas) due to start in early 2021.

Hydrogen and DRI-EAF. ArcelorMittal Europe owns Europe’s only DRI-EAF facility in Hamburg, where a project is planned to test the ability of hydrogen to reduce iron ore and form DRI on an industrial scale, as well as testing carbon-free DRI in the EAF steelmaking process.

ArcelorMittal announced in September 2019 that it had commissioned technology provider Midrex Technologies to design a demonstration plant at its Hamburg site to produce steel with hydrogen. 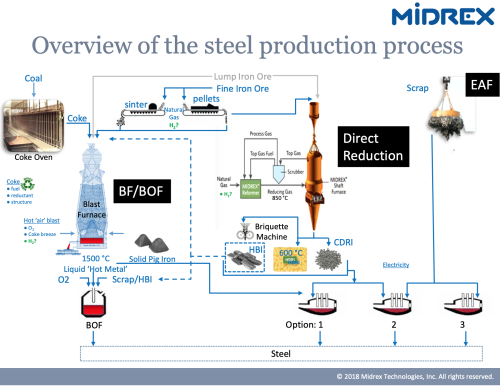 Smart Carbon with hydrogen. ArcelorMittal is also planning to expand its use of the Smart Carbon technology route. At ArcelorMittal Fos-sur-Mer (France) a study is underway in collaboration with partner Lanzatech to build a second Carbalyst plant in addition to the one under construction at ArcelorMittal Gent (Belgium).

This involves carbon capture from the blast furnace waste gas, and biologically converting it into ethanol for use as a biofuel or recycled carbon feedstock for the chemical industry. In parallel with the company’s electrolyzer project in Bremen, the Carbalyst plant in Fos-sur-Mer will boost CO2 savings through hydrogen injection, supplied by a large-scale electrolyzer that will produce the hydrogen locally from renewable electricity.

First verified green steel for customers. The first impact of these decarbonization efforts means ArcelorMittal Europe will be offering customers green steel products this year, when the first 30,000 tonnes will be ready.

A system that quantifies the CO2 emissions savings made due to the decarbonization projects being rolled out by ArcelorMittal Europe has been developed. Customers will be able to buy green steel, based on verified emissions compared with a 2018 baseline.

To fund the capital investment needed for the projects announced today, ArcelorMittal Europe is preparing funding applications to the EU’s Innovation Fund which is designed to support low-carbon investments in the European Union.

This begs the question - what is the best thing to do with hydrogen?

[ Assuming we will have considerable excess renewable electricity ]

Here are some comments of mine:
H2 is difficult to store and transport and there are loses making it.
thus,
Use batteries if you can, much lower loses than making H2: (so no to cars and buses)
Batteries are too heavy for aircraft - may be a possibility here.
Could also work for ships (or maybe just use methane, which is clean other than the CO2 (!)).

The ideal one would be a chemical process that can work with or without H2, so you make it on demand when there is excess renewable electricity.

Good points mahonj.
The SSAB HYBRIT project is another "Fossil- free" Steel production process that uses Biomass and could possibly be combined with the Arcelor Mittal H2 process (here: http://www.hybritdevelopment.com/articles/three-hybrit-pilot-projects).
Some thoughts:
- Steel production does not have the infrastructure issues of auto transportation.
- H2 does not have good volumetric energy density except in liquid form which is expensive and difficult to handle. Liquid H2 use in long range aircraft which has been tested is still not practical and compressed H2 brings up "Hindenburg" images.
- Use H2 and renewable NG to make Methanol which can be used for both chemical processes, long range trucking, and ships.

Just think! They could use bio materials to make steel. They could heat wood and make charcoal to reduce the iron. And cut down the rest of the existing forests to make "green steel". Which is why a lot of the forests in England and elsewhere were cut down in 18th century.

Hydrogen would be OK to use to reduce iron ore if the hydrogen could be produced in a ecological manner. I would suggest using nuclear power for high temperature electrolysis.

' I would suggest using nuclear power for high temperature electrolysis.'