This is the first such investment from the Strategic Innovation Fund (SIF) announcing support for a Small Modular Reactor (SMR), and is directed to a developer of innovative Generation IV nuclear technology. The company’s IMSR power plant will provide high-efficiency on-grid electricity generation, and its high-temperature operation has many other industry uses, such as zero-carbon hydrogen production.

SMRs are a game-changing technology with the potential to play a critical role in fighting climate change, and rebuilding our post COVID-19 economy.

The funding will assist with Terrestrial Energy’s completion of a key pre-licencing milestone with the Canadian Nuclear Safety Commission.

In accepting the investment, the company has committed to creating and maintaining 186 jobs and creating 52 CO-OP positions nationally. In addition, Terrestrial Energy is spending at least another $91.5 million in research and development.

The funding announcement comes one week after Ontario Power Generation announced it will advance work with Terrestrial Energy and two other grid-scale SMR developers as part of the utility’s goal to deploy SMR technology.

IMSR. The IMSR incorporates proven molten salt reactor technology with patented enhancements for a reactor that has high industrial value. The IMSR uses molten salt as coolant and fuel. This is in contrast to water circulating through a highly pressurized cooling system and solid fuel, both of which are the signature features of Generation I, II and III conventional reactors.

When a molten salt coolant and molten salt fuel are used in combination, the reactor has the potential to incorporate the virtues of passive and inherent reactor safety as well. As a result, using molten salt technology in the IMSR design leads to a nuclear power plant that is “walk-away” safe and has transformative commercial advantages, the company claims. 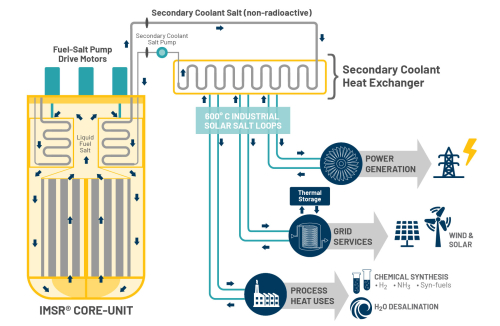 The IMSR improves upon earlier Molten Salt Reactor designs by incorporating key innovations that create a reactor suitable for industrial use and ready for commercial deployment. The key challenge to MSR commercialization has been graphite’s limited lifetime in a reactor core.

The IMSR patented innovation integrates the primary reactor components, including the graphite moderator, into a sealed and replaceable reactor core called the IMSR Core-unit. This has an operating lifetime of seven years, and it is simple and safe to replace. 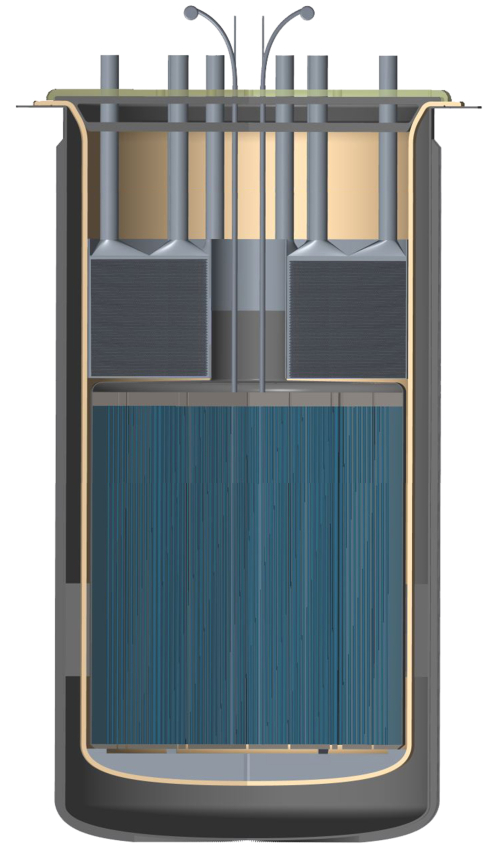 The Core-unit supports high capacity factors of IMSR power plants and hence high capital efficiency. It also ensures that the materials’ lifetime requirements of other reactor core components are met, a challenge often cited as an impediment to immediate commercialization of MSRs.

The result is a small modular reactor that delivers a combination of safety, high energy output, simplicity of operation, and cost-competitiveness necessary to drive broad commercial deployment.

Looks very promising especially if they can hit their cost goals. They claim a lower cost than natural gas, wind or solar and it is available 24/7

Impressed with the claimed 47% thermal efficiency for electric power. This should be the way to go if you need to make hydrogen as you have both high temperatures and low cost electricity

@SJC: Core unit (including graphite) is swapped out every 7 years to avoid the problems long term graphite irradiation (swelling, etc). Terrestrial Energy knows what they are doing.