Solaris unveiled the Urbino 15 LE—a 15-meter battery-electric bus that is the company’s first electric bus targeted at both urban and intercity transport. Urbino 15 LE electric will make it possible for operators to plan zero-emission routes not only within the city confines but also beyond these.

The heart of the Urbino 15 LE electric is a 300 kW electric motor. To boost efficiency and to reduce energy consumption even further, the propulsion system was made using silicon carbide (SiC)-based circuits. The motor is liquid-cooled; the driving power is transmitted to the second axle of the vehicle. Energy derived from a set of 6 batteries, with a total capacity of 470 kWh, is fed into the propulsion system. 4 packs have been installed in the rear of the bus, the remaining two have been mounted on the roof. 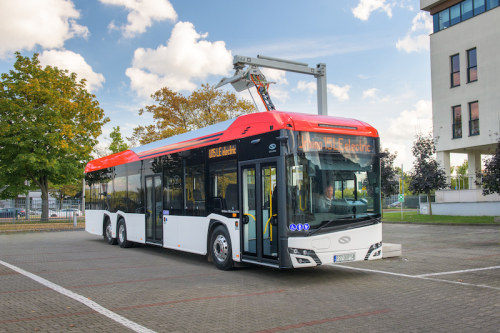 The latest generation Solaris High Energy+ batteries offer ranges of up to a few hundred kilometers on a single charge. The batteries in the new model can be recharged in fast mode, using a pantograph—both a conventional, roof-mounted one, as well as an inverted one, lowered onto the bus roof at the charging station. Moreover, each model of the tri-axle electric bus is fitted with a plug-in connector for recharging vehicles on the premises of a bus depot.

For the convenience of the clients, the producer has devised four options of placing the charging plug-in in a bus: it may be placed above the first axle in the left or right part of the vehicle, in the front of it or in its back.

The newly released model features an air conditioning system with a heat pump function, which uses heat drawn in from outside to reach the right vehicle temperature. This solution allows to raise the energy efficiency of the vehicle, which translates directly to a widened driving range. The device uses carbon dioxide as the working fluid.

The air-conditioned interior of the bus holds 53 seats, with two additional folding seats. Two seats in the vehicle are fitted with ISOFIX—a system that enables the securing of a child seat. In a two-door version the Urbino 15 LE electric can hold up to 65 standard seats.

The first two Solaris Urbino 15 LE electric were made chiefly with Scandinavian operators in mind. That is also why the presented bus will feature special solutions in compliance with Busnordic norms and the so-called Scandinavian package. Bearing in mind the tough climate conditions, the designers made sure that both thermal and travel comfort are ensured during rides. Vehicles of this type may contain other components that facilitate their operation in difficult conditions—for example additional high beams, a sandspreader or a cache for snow chains.

Solaris has experience with regard to the production of 15-meter tri-axle buses; so far, the manufacturer has already delivered nearly 1,300 vehicles of that type to customers.