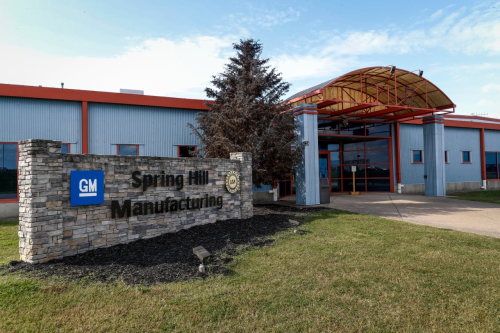 In addition, the company is confirming investments in five Michigan plants, including the Lansing Delta Township Assembly and Flint Assembly for future crossover and full-size pickup production.

The all-new Cadillac LYRIQ will be the first EV produced at Spring Hill. Production of the Cadillac XT6 and XT5 will continue at Spring Hill. The facility will build both traditionally powered Cadillac products and EVs.

The six US facility investments total more than $2 billion, bringing the total amount GM has invested or committed to invest in its US manufacturing sites to more than $29 billion since 2009. Newly announced planned investments include:

Launch timing and additional product details will be released at a later date.

In the last 19 months, GM has committed to invest more than $4.5 billion at three US manufacturing sites to prepare those facilities for EV-related vehicle production.

In January, GM announced it was investing $2.2 billion at its Detroit-Hamtramck Assembly, now known as Factory ZERO, Detroit-Hamtramck Assembly Center. Production of the first all-electric GMC HUMMER EV pickup, the first of a variety of all-electric trucks and SUVs to be built at GM’s Factory ZERO plant, will begin in late 2021. This will be followed soon after by the Cruise Origin, a purpose-built electric, self-driving vehicle.

GM is also investing an additional $800 million in supplier tooling and other projects related to the launch of the new electric trucks.

In March 2019, GM announced it would invest $300 million in Orion Assembly to produce a new Chevrolet electric vehicle. This new Chevrolet EV joins the existing Chevrolet Bolt EV and will be designed and engineered based on an advanced version of the current award-winning Bolt EV architecture.

Interesting to watch GM offering their premium vehicles as their first serious foray into EVs...way out of finance range for most of us.

High end have margins, as long as batteries cost this makes sense.

@Lad -- they weren't serious with the Volt or Bolt? I think they realize their previous failures and are now following the approach of others in the industry (ie. Tesla).

The Chevy Volt (basically a Cruze PHEV) and the Chevy Bolt designed by a team from GM Korea, formerly Daewoo were not vehicles GM sold in the USA (which are mostly SUV and trucks).
The Cadillac Lyriq is a "7-passenger large SUV" that will compete with the Tesla Model X and the Cadillac Lyriq has a spectacular interior, much better than the Tesla Model X. The HUMMER is a total badass truck with great off-road capabilities and decent looks.
Tesla started with the top end Model S and X, then came the Model 3 and Y. GM should have a good profit margin on the HUMMER and Lyriq. When the price of batteries comes down the other mainstream EV should follow.