California’s latest greenhouse gas data shows that while the state continues to stay below its 2020 target for emissions, there is much more work to do to achieve carbon neutrality by 2045.

The California Air Resources Board released GHG emissions data for 2018 showing that emissions remain below 1990 levels but are effectively flat compared to 2017, while the economy grew by 4.3%. The data shows a slight increase in overall emissions from the previous year, and a slight decline in emissions from transportation, which is the state’s main source of both GHGs and air pollutants. 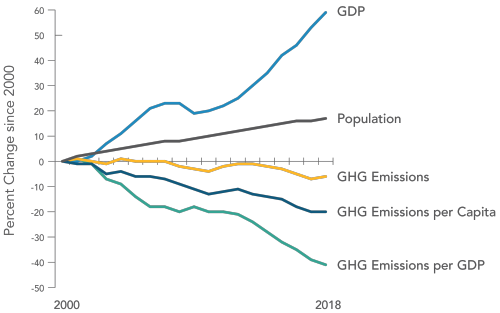 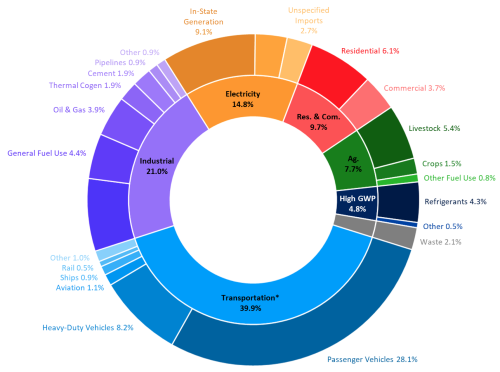 2018 GHG Emissions by Scoping Plan Sector and Sub-Sector Category. This figure breaks out 2018 emissions by sector into an additional level of sub-sector categories. The inner ring shows the broad Scoping Plan sectors. The outer ring breaks out the broad sectors into sub-sectors or emission categories under each sector. Source: CARB GHG Inventory.

Industry is already increasing the use of alternatives to petroleum diesel, including renewable diesel and biodiesel. This is in response to market signals from the Low Carbon Fuel Standard including recent announcements by California refiners to convert their facilities to produce 100% cleaner renewable fuels, keeping jobs and economic activity in the state.

CARB has approved additional measures to reduce emissions of greenhouse gases from super pollutants that must also be reduced significantly. Those pollutants include fugitive methane, hydrofluorocarbon refrigerants and other chemicals with global warming impact tens to thousands of times greater than carbon dioxide. Because of the enormous potential impact of these products, reducing their emissions has a disproportionate benefit to the environment.

CARB has also approved a method for quantifying carbon capture and sequestration projects as part of the LCFS. This technology allows emitters to capture the carbon generated by their operations and sequester it underground in secure rock formations. CARB staff is also evaluating direct air capture technology.