Fossil fuels still receive most of the international government support provided to the energy sector despite their “well-known environmental and public health damage,” according to new research from Rice University’s Baker Institute for Public Policy.

“There is evidence that fossil fuel subsidies are socially inequitable, that they encourage smuggling and waste, and distort economies in ways that undermine economic efficiency while harming the environment and the climate,” wrote Jim Krane, the Wallace S. Wilson Fellow for Energy Studies at the Baker Institute; Francisco Monaldi, fellow in Latin American energy policy at the Baker Institute; and Walid Matar of the King Abdullah Petroleum Studies and Research Center.

Their paper tracks fossil fuel usage and government subsidies since the the 2009 G20 summit, during which representatives from 20 countries discussed global financial and socioeconomic issues and agreed to “phase out and rationalize over the medium term inefficient fossil fuel subsidies.”

A decade later, fossil fuels continue to constitute 80% of global energy consumed—as they have since about 1910, when coal consumption surpassed that of biofuels, the researchers wrote.

In 2018, eight member states maintained $207 billion in fossil fuel subsidies, International Energy Agency (IEA) data show. Costs ranged from a low of 0.3% of GDP in China to nearly 6% of GDP in Saudi Arabia, where, despite two cycles of price hikes, 60% of the cost of energy products and services continued to be borne by the state.

Subsidies remained sticky outside the G20 as well. Advanced countries were still spending some $800 billion per year to support purchases of fossil fuel products and services, versus $140 billion for all subsidies worldwide on renewable power generation. Retracting fossil fuel subsidies, by estimate of the International Monetary Fund (IMF), would bring a 22% reduction in CO2 emissions1 alongside public health benefits from reduced local pollution and traffic. This paper examines the political and social rationale behind fossil fuel subsidies, the factors that make them so difficult to retract, and concludes with several policy recommendations aimed at easing the path to subsidy reform among G20 member states and non-members. 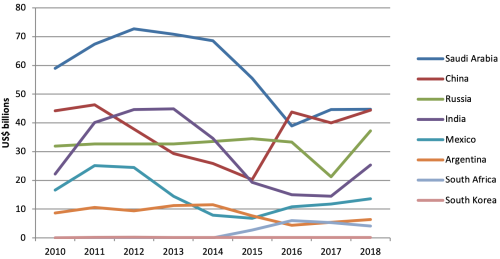 As of 2018, “advanced countries were still spending some $800 billion per year to support purchases of fossil fuel products and services, versus $140 billion for all subsidies worldwide on renewable power generation,” they wrote. “Retracting fossil fuel subsidies would bring a huge reduction in CO2 emissions alongside public health benefits from reduced local pollution and traffic.”

The authors wrote that fossil fuel subsidy reform is “so unambiguously beneficial that it is often described as one of the few areas within the field of economics around which there is widespread agreement among scholars.”

Fossil fuel subsidies are regressive, disproportionately benefiting the “better off,” according to the paper—an estimated 61% of gasoline subsidies accrue to the top 20% of income earners, while the bottom 20% receives just 3%. But the subsidies do represent a large portion of income for those in the bottom 20%, so simply removing them without compensation “would be socially undesirable and politically dangerous,” the authors wrote.

Subsidy reform will require a comprehensive communications campaign to publicize its economic and environmental benefits, according to the authors. Talk of higher gas prices tends to incite protest, so further stimuli may be necessary, they argue, including alternate benefits or even cash “basic income” stipends.

Saudi Arabia, for example, has “successfully reduced its long-standing discounts on fossil fuels, which, compounding over four decades, made it the world No. 5 consumer of oil,” Krane said. “The kingdom’s two rounds of price increases appear to have reduced oil consumption, an important victory for Riyadh, since oil exports are its main source of government revenue.”