In 2019, during the UITP Global Public Transport Summit representatives of Solaris and RATP Group (Régie Autonome des Transports Parisiens) signed a contract for lease and tests of the Urbino 12 hydrogen. Over the next few weeks, RATP will test the hydrogen-fueled bus on the streets of Paris. RATP will devote most of this time testing the operational capabilities of the vehicle in regular passenger traffic. 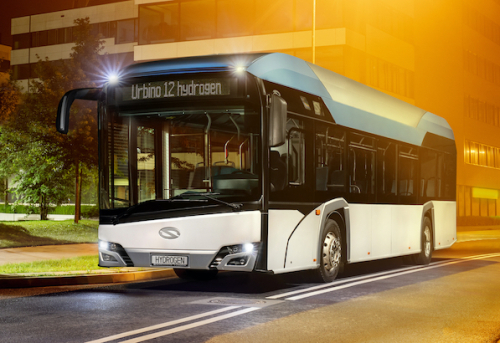 The Solaris hydrogen-powered bus tests will be carried out in the south of Paris. The vehicle will be stationed at a depot in the Thiais district, and will be refueled at the Jouy en Josas station in the south-west suburbs of the capital.

The Urbino 12 hydrogen bus uses a 70 kW fuel cell stack to generate energy. The hydrogen supplied to the fuel cells is converted into electricity, which, in turn, is feeding directly the bus driveline which consists of an axle with electric engines. The bus is also fitted with a Solaris High Power battery acting as an additional electric power storage facility.

The hydrogen is stored on the roof in five tanks. The Urbino 12 hydrogen buses are able to match the vehicles with conventional drives in their range.

Since the première of the hydrogen bus in June 2019, Solaris has been awarded orders from the Netherlands, Germany and Italy for 57 buses in total. The first vehicles will make it to Bolzano, Cologne and Wuppertal by the end of this year.

RATP Group is the largest French city carrier serving millions of passengers daily in Paris and the entire Île-de-France region. Importantly, the carrier has decided to completely transform its fleet of 4,700 buses to low-emission vehicles by 2025. So far, the carrier's fleet includes 19 Solaris Urbino 18 CNG buses as well as three Solaris Urbino 8.9 LE electric buses.