A new study finds that from April to July American households spent an extra $6 billion to power their homes after a 10% rise in residential electricity use during the pandemic. To reduce the risk of contracting COVID-19, roughly one-third of Americans are working from home.

As a result of the shift, household electricity use is up 10%—which correlates with estimates of the share of the labor force working from home—largely balancing out a decline in commercial and industrial power use. Using more electricity at home means higher electric bills. 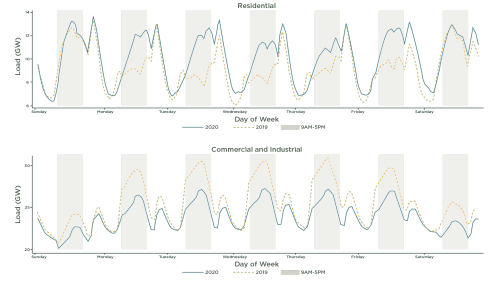 With an economic downturn, one would expect electricity use to drop across the board as it did during the 2008 financial crises. Today, we’re seeing something different. Total consumption declined just 3.5 percent this spring and early summer as steep drops in commercial and industrial use, expected with rising unemployment, were uniquely balanced out by a jump in use by households. These households are then having to pay higher bills during a time of economic hardship.

Cicala is a non-resident scholar at the Energy Policy Institute at the University of Chicago (EPIC) and an assistant professor of economics at Tufts University.

Using monthly data from the US Energy Information Administration (EIA) and hourly data from Innowatts, a utility analytics company, Cicala found that higher residential power use is masking significant declines in commercial and industrial consumption. Usage in those sectors fell by 12% and 14%, respectively, from April to July as shutdowns closed office buildings and unemployment rose.

By July, total consumption was returning to normal levels, indicating an improving economy in most downturns. Not so in this one, according to the data. Residential use was still persistently high while industrial and commercial use was 5% below normal, comparable to the overall decline seen following the Great Recession when the economy was sluggish.

While unemployed workers may also be contributing to the higher residential use, Cicala’s data points to significant increases coming from employed Americans working from home. This is most clearly seen in the regional data. The areas with the highest rate of Americans working from home also saw the highest increase in residential use—New England, Illinois and California. The smallest increases occurred through Appalachia and South-Central states.

The shift to home offices has put an additional expense on families. From April to July, American households spent nearly $6 billion more on their home electricity bills. That translates to a monthly increase of about $11 per household. The average bill from utilities serving one-fifth of U.S. households was more than $20 a month above normal. In July, it was $50 above normal per household for California and Connecticut residents.

Working from home does have its benefits as workers are filling up their gas tanks less, and spending less of their time driving to and from work—fewer cars on the road also means fewer emissions. But this misses an important part of the calculation. Just as dense cities are more energy efficient than suburbs, it requires more energy to power many, many homes than to power single office buildings. As such, the trend toward working from home could increase emissions from the power sector on net. The future of working from home is not as green as one might think.

This point is especially important given that more than one third of firms that have adopted remote work believe it will continue in some form after the pandemic. This trend will no doubt result in a mixed format where both offices and homes are simultaneously drawing power.

Even $50/mo is only about $2.50 per working day.  The cost of commuting is usually several times that; $2.50 won't even cover bus fare, and that's another out-of-pocket expense.

I imagine that those households which are working from home (and still have jobs) are doing quite well.

What else would you expect?
You have to cool in summer(in the US) and heat in winter.
Parts of the office will probably stay open so they'll have to heat them as well.
As EP says, if you have a job and can work at home, you should be OK, just a bit bored and stir crazy. Pity the people who have lost their jobs or businesses (and eventually homes).
What annoys me is "ghost" buses racing around with 0-3 people on them, and aircraft flying almost empty.
It is a pity they can't find a way to consolidate multiple flights (across airlines) into one.
However, I imagine that by the time they have figured out the logistics and economics of this, the crises will be over.