Santos Managing Director and CEO Kevin Gallagher said the successful injection occurred earlier this month in the Strzelecki field in the Cooper Basin and Santos would now finalize technical and commercial arrangements with the aim of having the 1.7 million tonne per year project ready for Final Investment Decision by the end of the year. 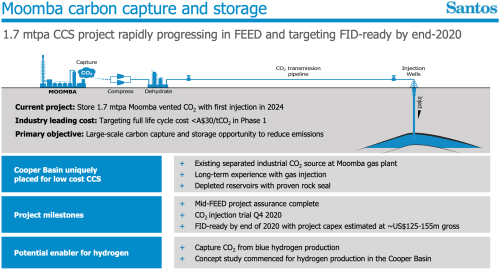 Ultimately, the Moomba CCS Project has the potential to store up to 20 million tonnes of carbon dioxide per year.

We will need an approved methodology for CCS to be in place with the Clean Energy Regulator before we take a final investment decision on our Moomba CCS Project because carbon credits are essential to make it stack up economically with the cost of abatement still at around A$30 per tonne. Our aim is to drive these costs lower with scale and experience, but the first step is to generate carbon credits to enable initial development.

Our Moomba CCS Project is one of the most globally competitive projects – it will be the second largest in the world and one of the lowest cost project at our current estimate of around A$30 per tonne.

Gallagher said that this successful test, along with recent Federal government announcements, paves the way for large-scale CCS to drive down Australia’s carbon emissions. Experts, including the International Energy Agency (IEA) and the Intergovernmental Panel on Climate Change have identified CCS as a critical technology to achieve the world’s climate goals.

With the world still relying on hydrocarbon fuels for 80 per cent of its primary energy, zero emissions technologies that make hydrocarbon fuels cleaner are essential to meet the world’s emissions reduction targets. Today, CCS projects store around 40 million tonnes per year of carbon dioxide, far short of the more than two billion tonnes of carbon dioxide the IEA forecasts that CCS projects will need to store each year by 2040.

Australia has a natural competitive advantage in CCS with known high-quality, stable geological depleted storage basins capable of injection at a rate of 300 million tonnes per annum for at least 100 years—the same basins that have previously safely and permanently held oil and gas in place for tens of millions of years. Australia needs low-cost abatement to maintain our position as a leading energy exporter and manufacturer of energy-intensive materials such as steel and cement, and to enable new industries like hydrogen.

We should have CO2 pipelines taking it from power plants to wells.

At $30/tonne and 7.07E-4 metric ton CO2/kWh (EPA average electricity, delivered) that comes to about 2.1 cents per KWh for carbon charge or an ~50% increase in the price of current electricity.

"~50% increase in the price of current electricity." where Matt?

"300 million tonnes per (year) for at least 100 years..."
We have lots of spent wells in Texas and Oklahoma near power plants.

Paroway. OK. Adjust on two accounts, I see they were Aust $, which is $0.71 US. Second, take $0.10/KWh electricity since I referred to EPA CO2 in delivered electricity. So about a 10% increase in electricity cost.