A team from KU Leuven and the University of Antwerp in Belgium has developed a new process that is suitable for the distributed, small-scale production of “green” ammonia. The process, called PNOCRA (Plasma Nitrogen Oxidation and Catalytic Reduction to Ammonia), combines plasma‐assisted nitrogen oxidation and lean NOx trap technology, adopted from diesel‐engine exhaust gas aftertreatment technology.

PNOCRA achieves an energy requirement of 4.6 MJ mol−1 NH3, which is more than four times less than the state‐of‐the‐art plasma‐enabled ammonia synthesis from N2 and H2 with reasonable yield (>1 %). A paper on their work is published in Angewandte Chemie International Edition. 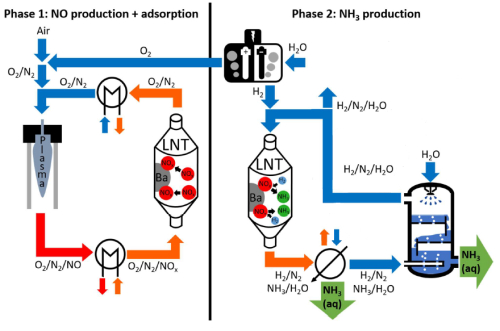 Ammonia is one of the most important globally produced chemicals. It is an essential fertilizer in agriculture and a crucial building block in chemical and pharmaceutical industries. It also emerges as an alternative carbonless renewable fuel. The industrial production of ammonia via the Haber-Bosch process amounts to ca. 150 million tons annually. The Haber-Bosch process operated with natural gas results in ca. 1.5 kg CO2 production per 1 kg of NH3. Therefore, greener, more sustainable routes towards ammonia production are actively investsigated. The use of “green”, “blue” or “turquoise” hydrogen in the Haber-Bosch process is an option. Alternatively, electrification of ammonia synthesis can be achieved with electrocatalysis or with plasma technology. Plasma is an ionized gas which consists of electrons, ions, neutral gas molecules, excited molecular species, radicals and atoms, and photons.

… Plasma generates highly reactive species which facilitate N2 fixation, can be operated under atmospheric pressure, and can be powered with renewable electricity, which makes it perfectly suited for decentralized and intermittent production.

… In this work, we propose the PNOCRA process (Plasma Nitrogen Oxidation and Catalytic Reduction to Ammonia): a novel process, combining plasma with engine exhaust gas after-treatment technologies to overcome the inefficiency of plasma processes for ammonia synthesis. Plasma is suited very well for oxidation reactions, rather than chemical reduction. Therefore, in the proposed process, N2 is first oxidized to NOx, and reduced subsequently to NH3 using concepts from the automotive industry where ammonia is synthesized aboard of vehicles for abating NOx emissions from exhaust gases.