For its evaluations, CR’s engineers looked at the comparative performance of these vehicles’ active driving assistance, which refers to when adaptive cruise control (ACC) and lane keeping assistance (LKA) are engaged simultaneously to control steering to keep the car within the lane lines and to control speed through acceleration and braking so that the car remains a set distance in traffic from vehicles traveling ahead. If vehicles had both of these features, they were considered for inclusion in the evaluations, regardless of the level of automation the automaker claims.

Cadillac’s Super Cruise remained CR’s top-rated system because, when turned on, it uses direct driver monitoring to warn drivers that appear to have stopped paying attention to the road. General Motors told CR that Super Cruise will be on 22 GM vehicles by 2023. 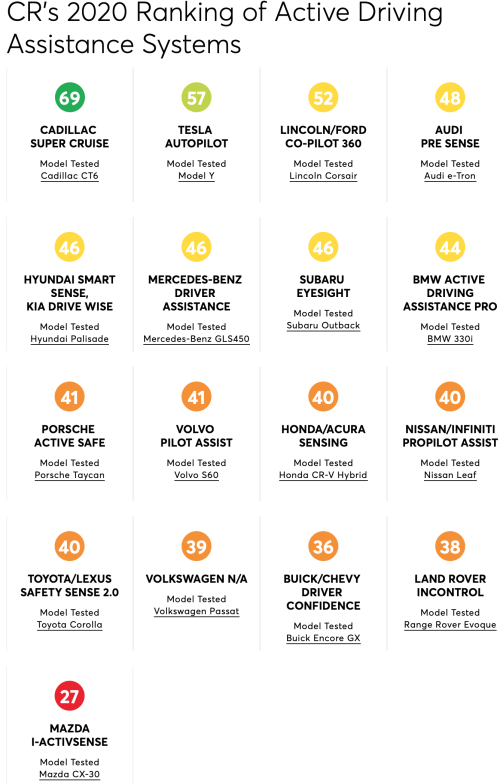 Of the other systems tested, CR reported minor improvements in lane keeping performance for the Tesla and Volvo. Systems that didn’t give clear warnings to the driver to pay attention, such as Volvo’s, or that failed to keep the vehicle within its lane, even on fairly straight roads, such as systems from Buick, Mazda, and Land Rover, didn’t fare well in the overall scoring.

When CR requested comment from these companies, several said their lane keeping assist systems were not designed to keep the vehicles centered.

Even with new systems from many different automakers, Super Cruise still comes out on top due to the infrared camera ensuring the driver’s eyes are looking toward the roadway.

Monitoring whether the driver is paying attention is a big part of the reason that Super Cruise still tops the CR ranking. The system uses a small camera facing the driver’s eyes to assess whether they are watching the road ahead. If the system determines that a driver isn’t paying attention, it delivers multiple warnings—such as bright red lights on the upper rim of the steering wheel—to grab the driver’s attention. If the driver still does not react, the system will start to slow the car down on its own, eventually bringing it to a stop. It also will call for help.

CR’s evaluations of active driving assistance systems take into account the work of the National Transportation Safety Board (NTSB). In studying deadly highway crashes involving the use of these systems, NTSB investigators have highlighted the risk of “automation complacency”—when people rely too much on an automated system and tune out from the driving task—as well as the foreseeable misuse of the systems in locations or conditions where they haven’t been designed to be used safely.

The NTSB has issued recommendations urging the nation’s primary road-safety regulator, the National Highway Traffic Safety Administration (NHTSA), to help develop and then enforce performance standards for safety technology that would help keep drivers engaged while using active driving assistance systems. NHTSA has not yet acted on the recommendations.